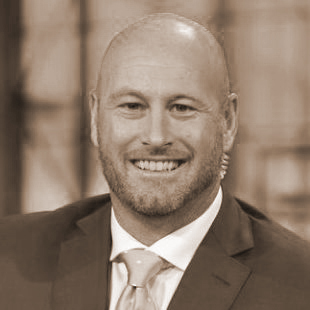 When Trent Dilfer first came to Fresno State University in 1990, some people who saw him thought that the 6'4", 237-pound athlete was recruited as a linebacker or tight end. Quite a few teams did scout him with the idea that the big kid from Aptos High School could fill one of those positions. While visiting the multi-sport, prized athlete, Bulldog assistant coach Rich Olsen watched Trent display his agility and strength while scoring forty points in a basketball game. Olsen started thinking that this big kid could have the makings of an outstanding college quarterback and he told head coach Jim Sweeney. “I always give Coach Sweeney credit for letting me try it," says Dilfer today. "He agreed to the idea and gave me a shot and I went from number nine on the QB depth chart to number one. I just got great training here and had a lot of great people around me and I wound up one of the bigger quarterbacks in college football. Jim Sweeney was the best. He taught the aspect of coordinating mental and physical toughness which led to our resilience. Coach was great at bringing that out of us as a team and as individuals. He was an absolutely phenomenal football coach. He taught you all the things you really needed. It helped my fourteen years in the NFL, helped me raise my kids, and even helps my new career at ESPN. Jeff Tedford was our quarterback coach back then and he helped me and I was around so many great players as well like Lorenzo Neal, Tydus Winans, Ron Rivers, Anthony Daigle, Lee Harris, David Dunn, and I could go on and on with the names.All you had to do was give them the ball and they made me look good."

In Trent's two and a half years as the Bulldog's starting quarterback, he led them to win or share conference titles in three consecutive seasons. In 1993, Dilfer had a banner year, passing for a record 3,799 yards and thirty touchdowns. He was named the WAC Offensive Player of the Year, won All-American honors, and snagged the Sammy Baugh Trophy which is awarded to the nation's top college passer, joining the likes of John Elway, Steve Young, Jim McMahan, and others. Dilfer also set an NCAA record in 1993 by throwing 271 consecutive passes without an interception. Trent started and starred in two bowl games including perhaps the biggest football game in Fresno State history, the Dogs' huge 24-7 win over USC in the Freedom Bowl on December 29, 1992. It was the first meeting of the two schools and Fresno State was an eight-point underdog but soundly beat the 23rd ranked Trojans in front of a crowd of 50,745 at Anaheim Stadium with millions more watching at home.

In the 1993 Jeep Aloha Bowl in Hawaii against Colorado, Trent set another NCAA record by throwing for 523 yards, the most ever in a bowl game. Trent Dilfer was chosen in the first round as the sixth pick overall by the Tampa Bay Buccaneers. In his long career in the NFL, Trent suited up with Tampa Bay, the Baltimore Ravens, the Seattle Seahawks, the Cleveland Browns, and the San Francisco 49ers. He threw for 20,518 yards and 113 touchdowns in a career. He led the Baltimore Ravens to victory over the New York Giants in away in 2005. He was also awarded the “Athletes in Action/ Bart Starr Award”. As an analyst on ESPN, Trent is gaining widespread popularity on NFL Live, NFL Primetime, and Sports Center.