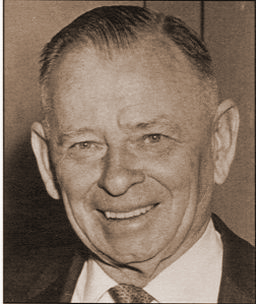 Born in Reedley in 1901, Dale Drake was a person who loved adventure and lived life fully on his own terms. His father, J.A. Drake, made a living as a blacksmith, but was also a man who liked to build things and became interested in a turn-of-the-century invention, the automobile. As J.A. showed a keen interest in engines, he and his sons began to tinker with new ideas relating to motors that could make the vehicles go faster. Dale and his brothers, Dutch and Lem, worked with their father on projects and around 1915, the Drakes developed a high-quality forged valve for automobiles. Their first big customer was Harry Miller, the world famous designer of American racing cars, who used the Drake valves in many of his engines. This relationship would lead to Dale becoming famous himself for his Drake engine, a mainstay in American auto racing for over fifty years.

Originally, Dale was more interested in flying as a young man. He was well-known as a glider pilot and was constantly working on new creations. Drake even established a world distance record in the 1920s for piloting towed glider flights. As aviation became more popular in the Roaring Twenties, federal officials began to mandate tighter controls which led to many confrontations between “ground-pounders" who did not fly, but made the rules and the "sky-gods" who lived to tame the skies. The constant bickering drove Dale to give up flying and return to engines. Back at work with the family at the Jadson Company (J.A. Drake & Sons), Dale was soon making a name for himself and the company. After Jadson was sold, Dale and Lem set up their own machine shop where they got to work on ideas for engines and racing. Dale became the crew chief for Lou Meyer, the first Indy 500 three-time winner. Using ideas from Lem and Dale's engines and Lou Meyer's driving skills, the partnership led to Indy victories in 1935 and 1936.

Collaborating with other stars of the racing world, such as Fred Offenhauser, things really took off for the Drakes, Meyer, and the "Offy" engine which captured five Indianapolis races in the eight years that these motors were produced by Offenhauser. Separately and together, these men dominated American automobile racing from the 1920s to the 1980s and beyond. The Meyer Drake Company bought out Fred Offenhauser in 1946 and in 1964, the company became Drake Engineering, whose midget engines continued to impress. The next year, the new Drake Turbo "Ofy" mini-engine cars went out and tore up the tracks in the Pocono, the Michigan, the Phoenix, and the Indianapolis 500 races, sending Ford back to the drawing board in an effort to keep up. According to the International Motorsports Hall of Fame, "fuel injection, greatly improved materials, better cooling, and other improvements all came under the Meyer-Drake banner." Cars with Drake-Offenhauser engines won twenty-four Indianapolis 500 races over a thirty-year span beginning in1946.

Dale continued to develop new components for his engines and even dabbled with motorcycles and bicycles. Drake's name rightly belongs alongside other legends of the motor sports world that were instrumental in making auto racing universally popular. He worked with great innovators, Harry Miller, L.