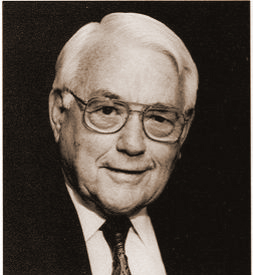 When Robert “Bob” Duncan was growing up in Fresno, he spent many happy hours playing ball on sandlots around town. Bob was a busy young man with school, scouting, a Fresno Guide paper route and working his chores around home. Even after losing his sight in one eye, Bob still participated in sports, playing ball when he could. In high school, he went out for the football team at Fresno High and managed to make the cut and he remembers what a thrill it was for him to carry the ball in the first game of the year against Bakersfield. Unfortunately, he failed to mention this to his parents, and when they heard, they immediately put a stop to it. Doctors said an injury could affect his good eye. He never wavered in his love for sports.

Bob's mother, Erma Duncan was an artist and she loved to make ceramic jewelry and gifts for friends and family. She got many requests for her work and the Duncan garage behind their house on Adoline Street turned into a mini-ceramics factory complete with a small kiln. "She loved to do things like that and it was sure to have an influence on me. When I went on to Fresno State, I took some ceramics classes there, as did my mom," remembers Bob. Bob was at Fresno State when he was drafted into the Army during World War II, but for "limited duty" because of his eye injury. When he got out of the service, Bob went to work with his family in the ceramic business.

His mother's products were popular, and when his brother, Dick, got out of the Marines, he joined the family company as well. By the 1960s, Duncan Ceramics had grown to 350 employees and was doing business worldwide. Bob became the President of the National Ceramic Manufacturers Association from 1963-1965. Along with being successful in business, Bob also had a great sense of community pride in his beloved Fresno.

He was impressed with the Fresno State sports programming, in particular, coaches like Jim Sweeney and Boyd Grant. He thought he would like to help Fresno State sports in the building of a new football stadium and sports complex on the campus. Bob became a Bulldog Foundation Trustee in 1963. He was the top fundraiser for the Bulldog Foundation for sixteen consecutive years from 1966 to 1981. In 1969, he received the NCAA College Football Centennial Award. He has been a member of the Bulldogs Quarterback Club, the Time Out Club, the Dugout Club, the Track Backers Club, Softball Club, and the Wrestling Club. From 1972 to 1975, he was the President of the Bulldog Foundation, which became the leading fundraising program of most U.S. colleges and universities. Bob Duncan donated $25,000 seed money for Bulldog Stadium for the initial research for the project and then Duncan Ceramics donated another $757,000 to the stadium-building fund. Bob and brother Dick also contributed $250,000 toward bringing the Bulldog Foundation office back to the university from its location on Shaw Avenue. The stadium was dedicated on September 5, 1981 and it was momentous for the university,but also for the people of Fresno and the San Joaquin Valley.

Bob was honored at halftime by the school and the Bulldog Foundation as the first Mr. Bulldog Endowed Scholarship from the BDF trustees was installed. A little known fact is that the university asked Bob if they could name the stadium after the Duncan family, but Bob said that although he appreciated the gesture, it would make more sense to name it Bulldog Stadium. Bob Duncan is a team player all the way. Bob Duncan has made dreams come true for many in his hometown. The list of awards and acknowledgements that Bob Duncan deserves would take up the main floor of the Save Mart Center which he also helped get built. However, if you know Bob Duncan, you are aware that all of that recognition pales against the strong sense of belief he has in Fresno and its citizens. Ask any athlete, coach, or fan and they will tell you, Bob Duncan deserves the biggest pat on the back in appreciation of all of his support, belief, and leadership of this community.