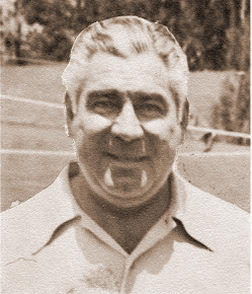 Called "The Golden Basque" by his legion of friends, Olin Dutra came within a few strokes of winning all four major golf championships. He did win the U.S. Open at the Marion Cricket Club in 1934 and the PGA Championship in 1932 in St. Paul, Minnesota. Dutra was runner-up in the 1934 Masters and missed tying for the British Open by one stroke in 1933, the same year that he was named to the U.S. Ryder Cup team. In 1932, he led the PGA Tour in money winnings with $9,000. He returned to Fresno in 1940 and Won the California State Open at Fort Washington. A match play format was used in both the Open and the PGA when Dutra won. In the latter, he was thirty-two under par for the 108 holes played. In the PGA, he edged the legendary Gene "Squire" Sarazan by one stroke, overcoming an eight stroke lead of little Bobby Cruickshank. Dutra's main ties to Fresno came as a young man when he was the second head pro at the fledgling Fort Washington Country Club which was nine holes at the time. He was also a head pro at the Sunnyside Country Club. In four years in Fresno, the big, long-hitting Dutra made a large circle of friends and admirers.

The year that he won the Open, Sunnyside members wired him congratulations. On the occasion of Jack Nicklaus Open title at Baltusrol in 1980, he was glued to his television set and rooting for the Golden Bear. "It was a tremendous show and I know Isao Aoki [Japan] wanted to win and played a courageous game,"Dutra said. "It was a great spectacle and it was a tremendous victory for one of the greatest golfers, a gentleman, and a real credit to our profession and to the country."From Sunnyside, Dutra was hired at the posh Brentwood Country Club in southern California and the Wilshire Country Club in Los Angeles. "Most men playing in the Open in those days were club pros whose main job was to tend shop, teach, look after members, keep everyone happy, and play mostly local tournaments," Dutra said. In 1969, he became the head pro at the San Luis Obispo Country Club.

Dutra was regarded by students and colleagues as one of the finest teaching pros in the business. Dutra also organized the Mexican PGA and staged the first Mexican PGA tournament which he won. "Yes, I won the championships of two countries," Dutra said, "But one of my most satisfying victories was when I returned to Fresno and Sunnyside and won the 1940 State Open."Dutra got his start as a caddy in Monterey, but his older brother, Mortie, urged him to make golf his career. He was inducted into the PGA, Northern California Golf Association. and Helms Foundation Halls of Fame. The big PGA Tour pioneer died on May 3, 1983 in Newman, California at eighty-three.