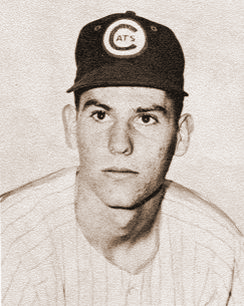 Dick Ellsworth can't recall a time when he wasn't throwing something at a stationary object. Ellsworth said. "I was blessed with a good natural throwing motion, so it was always fun to throw something." The tall Ellsworth converted that smooth left-handed throwing motion into a thirteen-year major league career that spanned five teams. "I think it would be hard for peopleto argue that I didn't play in the greatest era of baseball. I honestly believe that the late 1950s and the 1960s marked the end of the complete ball player. You played defense, you played offense, you played team ball-hitting behind runners and getting a sacrifice bunt down. I learned the game of baseball. You played just as hard on defense as you did on offense. It was before the era of the specialist."Ellsworth said when the manager handed him the ball as a starter, he was expected to go nine innings. No middle reliever, set-up man. or closer and, he added, no designated hitter. "To me, Williams, Musial, Mantle, Aaron, Mays, Banks, Drysdale, Koufax, and I played either with or against those guys, gave the fans the best baseball. It was quite a privilege to have been part of it. I've been to two old timers games in Chicago and I probably won't go again...I am not pleased with where major league baseball is today. I'm a minor league fan now."

Ellsworth is also part of the ownership of the current AAA Pacific Coast League Fresno Grizzlies. I was involved in the city leagues and remained there until I was twelve. I attended Washington Junior High School and played baseball at school. I also became aware of the Babe Ruth program." Dick attended Fresno High School and it was a life-changing time. Fresno Athletic Hall of Fame baseball coach Ollie Bidwell was not at Fresno High when Ellsworth arrived, but Bidwell was transferred to Fresno High that fall to replace the late Toby Lawless as baseball coach. "For me to go to Fresno High and then for Ollie to come at the same time was a real blessing in my life," Ellsworth said. "I mean no disrespect to anyone, but I learned more baseball from Ollie Bidwell than anyone. He really prepared me for a career in professional baseball." Fresno High's pitching staff included Ellsworth, Lynn Rube, and Mike Urrizola with shortstop, Jim Maloney, as an occasional starter.

During his senior year with the Warriors, Ellsworth did not lose a game. In order to get this talented group ready for league play, Bidwell booked a fifty- to sixty- game schedule. "We played the freshmen teams from Fresno State and California, semi-pro teams, police and firemen teams, then the high school schedule, American Legion, and night games in the city league," Ellsworth said. "Overall, my record in three years including all those activities was 105-5. Lots of innings."

Ellsworth graduated from Fresno High and finalized a three- year major league contract with the Chicago Cubs in the same week. His world was changing rapidly and he treasured every minute. By the following Monday night, he was on the mound at Wrigley for an exhibition game billed as the Chicago Rivalry.

Ellsworth remained with the Cubs for another three weeks and then was shipped to Fort Worth in the AA Texas League where he pitched every fourth day for six weeks. He was called to the Cubs in September and got to start against Cincinnati late in the season. When Ellsworth was nineteen, he drove to Mesa, Arizona for his first spring training with the big club. After camp, Cubs manager Charlie Grimm sent him back to Fort Worth which now was AAA and in the American Association. He wanted Ellsworth to pitch every fourth day, throwing as many innings as he could. His record was 10-14 with several shutouts. He was optioned to AAA Houston. He pitched two games, gave up one run, allowed six hits total, and was called back to the Cubs. He was in the majors to stay. "I can honestly say I can't remember a day when I played professional baseball that I couldn't wait to get to the park. What a thrill to put on a major league uniform every day.

Ellsworth's best season was 1963 with the Cubs when he went 22-10 with a 2.60 ERA, having pitched 297 innings,tallied more than 200 strikeouts, and at least than eighteen complete games. His next best season was 1968 when he was 16-7 with the Boston Red Sox under manager Dick Williams. Two more trades-Cleveland and Milwaukee-and Ellsworth decided to "hang 'em up."