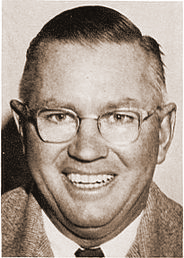 Malcolm Fiese played for Slip Madigan, one of the most colorful football coaches in California history, at St. Mary's College in Moraga. The Gaels, nicknamed the "Galloping Gaels," made history when they traveled east and beat one of the great Fordam teams. The team traveled by train and it was told that Madigan would stop along the way and pick up a few players. Fiese began his football career in the late 1920s at Salinas High School. Fiese was a sturdy 5'10" and 148 pounds with a sprinter's speed. He ran the 100-yard dash in 9.9 seconds and the 220-yard in 22.0 Madigan stressed speed and recruited Fiese as a quarterback for the Gaels for two seasons when he was switched to fullback for his senior year where he won All-Coast honors. In 1934, he called all the plays in a 13-9 upset of Fordam. The Gaels out-gained the Rams 400 yards to 133. Fiese also averaged forty-seven yards per punt. He graduated from St. Mary's in 1935 and became the head football and basketball coach at Regis College in Denver for two years before returning to his alma mater as a freshmen coach and director of minor sports.

Fiese moved to Fresno after being discharged from the Navy and took over the Catholic Youth Organization (CYO). He also served as an assistant coach and scout for Fresno State head coaches Ken Gleason and Clark Van Galder. It was his strategy of running speedy Donnie Driscoll at the teeth of the College of Pacific's defense that enabled Fresno to tie the powerful Stockton team at a score of 21-21 in 1953.