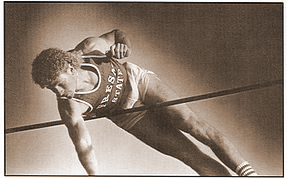 Winning an NCAA Division I championship in any field is an incredible thrill. Just a fraction of millions of student-athletes who have participated in college sports make it all the way. Doug Fraley not only did it once, he did it three times. Doug’s future as a world-class pole vaulter was already obvious at the tender age of seven when he cleared 6’1.70” in 1972 for an Inter-Age record in competition involving athletes five to nineteen from thirty-nine countries. Born in Hanford and raised in Lemoore, Doug was coached by his father, Bob, who would later mentor Doug all the way to NCAA Gold during his tenure at Fresno State. Bob built a backyard vaulting runway and pit for the younger Fraley to practice on, and by the time Doug was in eighth grade, he was clearing eleven feet. Later, when the family moved to Fresno, Doug left his mark as a Golden Eagle at Clovis West. In his sophomore year, he placed third in the state meet, but came back the next season to finish second with a 14’8” vault. As a senior, Doug became the first Valley athlete to ever clear 17’. at Fresno State, Doug got right to work, setting a school record as a freshman, with a vault of 17’9” and winning the Pan-American Games Junior Championship. The talented Mr. Fraley broke the eighteen-foot mark while a sophomore, which was good enough for third place in the NCAA championships. He was zeroing in on his lifelong goal of breaking the nineteen feet barrier. The following year he won his first NCAA gold medal by vaulting 18’11” for the title; the second-best mark ever, at the time, for a collegian and third highest in NCAA history. During Doug’s senior year at FSU, he dominated the pole vault event, by winning both the NCAA indoor and outdoor titles.

One of the greatest pole vaulters in collegiate history, the five-time All-American, Three-time NCAA champion left a school record vault of 18’11” and was the only Bulldog ever to win back to back NCAA titles. After graduating Fresno State with a degree in Physical Education and Exercise, Doug competed eight years on the IAAF Grand Prix Circuit in Europe which brought him to international caliber track meets all over the world. He managed to reach the long time goal of crossing over the nineteen-foot barrier when he vaulted 19’ ¼” at the 1992 Sisteire meet in Italy. Doug was a member of the USA Track and Field National Pole Vault Development staff where his father, Bob, was director. Together, they worked on such activities as the annual Pole Vault Summit held in Reno, Nevada and the North American Pole Vault Championships staged in Clovis since 2003. Both events draw thousands of fans and participants to the excitement and science of pole vaulting. Doug resides in New Orleans where he is a partner in a spinal care business and also is the coaching director for the Mardi Gras Track Club. Fraley was named the Co-Male Athlete of the Year with Kevin Sweeney in 1986. He is the only FSU athlete to win the award in three consecutive years.