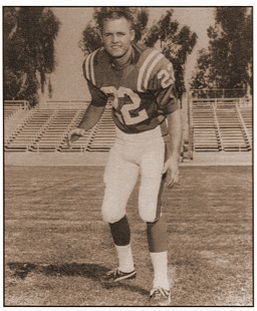 Many of our Hall of Fame athletes played more than one sport. McLane High School's Mike Freeman was no exception. Besides excelling on the football field, Mike was also a wrestler for the Highlanders and a sprinter in the 100- and 220-yard dashes for the track team.

Make no mistake about it, though, Mike Freeman was a football player. His roots in the game went all the way back to Bradfield Elementary School in Dallas, Texas in the late 1950s. He loved playing for the Bradfield Rams and knew then that football would be taking up a lot of his dreams. After the family moved to Fresno, Mike played at McLane his junior and senior years before embarking on a career that would take him through junior college, Division I college, and professional football. Mike later recalled, "I was a skinny little high school kid, 135 pounds soaking wet," but he had the heart and love for the game. At McLane, he was coached by Vico Bondietti, who taught Mike good football sense and anticipation.

Though small in stature, Mike won postseason awards and also played in the Fresno City/County ALL-Star game before going to Fresno City College. He weighed in at 145 pounds when he played in the defensive back field of legendary coach Claire Slaughter's Rams. It was also at FCC where Mike met the man who would become his mentor. The defensive secondary position coach was a young man by the name of Darryl Rogers. It was Rogers who recognized the talent for anticipation that Freeman possessed and it was also Rogers who instilled in Mike the most important thing about his role on the football team. "He taught me that it was my job to stop the other team from completing passes. Simple as that," laughed Mike later. “It wasn't because I was such a hard hitter in my career that helped me advance; it was that I did whatever it took to cause an incompletion."

Mike had two great years at FCC doing just that, making life miserable for quarterbacks and receivers. By the time he went to Fresno State to play for the Bulldogs, he had those skills finely honed. By then, he was all the way up to a solid 165 pounds. Freeman was thrilled to be playing for Fresno State and even more thrilled when Darryl Rogers was named the head coach of the Bulldogs. The student and his mentor were reunited and their Winning ways would continue on the next level. Fresno State was in the Pacific Coast Athletic Association then and Mike was an All-PCAA cornerback for two years. In 1978, his senior year, Mike was the captain of the Bulldogs and was named as a first team AIl-West Coast performer and named to the Associated Press All-American team as an honorable mention.

He was picked by the Minnesota Vikings in the fourth round of the NFL draft. Claimed on waivers by Atlanta, Mike played for the Falcons for three years as a cornerback and punt returner, "It was insta great experience playing at that level, says Mike. "I loved it all, the games, the players, the fans, even the traveling. "Mike Freeman came back to Fresno in 1973 after the conclusion of his NFL career and got his teaching credential at Fresno State. He coached at San Joaquin Memorial from 1973-1975 followed by more than thirty years as a part of one of the most highly decorated coaching staffs in local history at Clovis High School. Mike became the Cougars' running back coach under Tim Simons with Larry Kellom. John Sexton, Jack Erdman, Cliff Wetzel, and Bill Biggs. The Cougars won seven Valley Section Championships as well as many league and division titles under this coaching combination. "Clovis gn rootball nas been a great tradition and it's been great watching the youngsters grow into successful young men."says Mike, "I am grateful to be a part of it." Mike currently lives in Fresno with his wife, Janette.