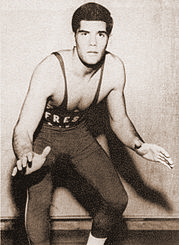 Mike Gallego was one of the first recruits when Dick Francis became head wrestling coach at Fresno State in 1964. Francis had coached Gallego at McLane High School, but Mike had since spent his last two high school years at Pacific Grove. Gallego was the very best Francis had during his reign. Francis said Gallego executed one of the greatest comebacks ever in the final match of the 1968 Division I NCAA championships.

Gallego trailed by a point with sixteen seconds left against Lamoin Markley, a tough competitor from Central Washington, who had squashed every opponent. Gallego had tried to go in for a takedown, but got knocked down and sat on the mat with legs spread and Lamoin between his legs. "Mike was in the worst possible position, but he came up off the mat, got behind him, got the takedown, and won the match," Francis recalled. "It was an incredible move, but typical of the competitiveness that Mike brought to every match." Gallego wrestled at 167 pounds while Lamoin had dropped from 210 to 169.

Currently, Gallego is a dentist in Grass Valley where he has lived since 1976 when he finished dental school. Gallego said he remembers the match against Markley well. "I remember Coach Francis throwing down his towel and starting to walk away disappointed because I came so close," Gallego said. "We looked at the film and everyone said, 'That was not a move, how did you do this?' Well, somehow I ended on top.got the takedown two points, and won. You still remember moments like that." Gallego's senior year was huge. He won the college division title that year, the National 171-pound AAU Freestyle Championship and was Athlete of the Year at Fresno State. His collegiate record that year was 47-1, his only loss was to John Woods of Cal Poly on a one point referee's split decision. Gallego defeated Woods in a rematch.

How close did he come to making the 1972 Olympic team? "Real close; in the freestyle finals for qualifying, I lost by one point to the man who went on to win the gold medal against a German wrestler. In 1971, I competed in the world tournament in Bulgaria. In 1972, I placed third in Tbilisi, Russia [Georgia]. It was right before the Olympics. Georgia was a great place and they produced some of the best wrestlers in Russia. The people treated us well, but they hated the Russians." Gallego finished third in the National AAU in 1970 and was second in 1971 and 1972. "I wrestled a little in 1973, but that was the end." By then, he was married and on his way to studying dentistry.