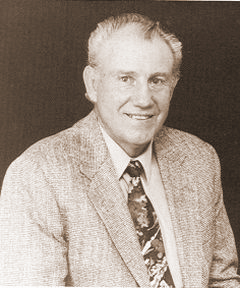 Merrit Gilbert is a prime example of a young man who listened, worked hard at whatever job he had, and became one of the most successful coaches in Central California history. Gilbert was born in Fresno, but lived with his grandparents in Los Angeles for a time while his father worked on the Hoover Dam.

Visalia was home when it came time for high school and Gilbert went to Visalia High School (now Mt. Whitney High) where he came under the wing of the late P.E. "Polly" Wilhelmsen. "I learned a lot about sports and a lot about life from Polly," Gilbert said. "He was a great coach who expected 110% from you at all times. He worked you hard, but was like a father-figure to me and many others." Gilbert played under Wilhelmsen for two years at Visalia High and one year at Visalia Junior College (now College of the Sequoias) after he was discharged from the Navy. In 1945, Visalia High was 11-0 in basketball during his senior year. He also lettered in football and track.

After a year at COS, he received a football scholarship to Fresno State. He played three seasons as an end and defensive back for Bulldog coaches Kenny Gleason and Pix Pierson. After graduation, he was hired to coach football, baseball, basketball. and track at Riverdale High School in 1951. "In addition to the coaching, I also drove the bus; all for a salary of $3,200,"Gilbert laughed. He was at Riverdale for three years and, in 1953, his basketball team won the North Sierra League title and finished 17-3. Gilbert was then hired by Sierra High School in Auberry where he coached basketball for the next seventeen years.

His Chieftains won ten North Sequoia League championships. Sierra won thirty-three consecutive games from 1960 to 1962. His 1962 team was 22-0. At that time, NYL teams did not advance to the state championships. Gilbert's overall twenty year basketball record when he retired from coaching to go into administration was a Central Section best 304-101. "I was fortunate to have some great players," Gilbert said. "There were a lot of Indian athletes such as Fred Shoshone and Morrie Lec. There were big, strong kids such as Lonnie Hughey, Darryl Patterson and Kenny Long."

Gilbert was in a near fatal automobile accident in Fresno in 1979. He suffered an injury which caused him to walk with a permanent limp. He was the Sierra High athletic director, Sierra Superintendent of Schools for ten years and, in 1984, became CIF Commissioner of all football and basketball athletics in the Central Section. In addition to his regular jobs, Gilbert managed to squeeze in eighteen years of being a sports official. Today. he and his wife live in Cayucos where he is a member of the Morro Bay Golf Club and plays his favorite pastime several times a week.