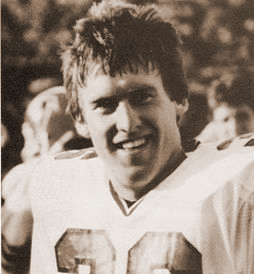 Every athlete dreams of moments of glory and every fan anxiously waits for them. With football, it's the accurate passing quarterbacks, the hard-running tailbacks, and the sticky-fingered wide receivers who have the best chances to earn a slice of the celebrity pie. But what about football's defensive backs? They don't necessarily become superstars, but every once in awhile, they rise to the top.

Fresno-born Glazebrook was a standout defensive back for the Hoover High School Patriots, a leader in the Pats' championship run in the North Yosemite League, while himself winning all NYL honors and playing in the prestigious City-County All Star game. Not bad considering that, due to his small size, he didn't get to play varsity until his senior year at Hoover. After high school, Bob found himself a very big part of the defensive backfield for the Fresno City College Rams as he led them to a 1975 Valley Conference championship. He was the unanimous choice for All-Valley Conference safety and honored for his work on special teams for the Rams and is a member of the Fresno City College Football Wall of Fame. Very soon after that, he was happy to hear that Fresno State coach Jim Sweeney had a spot for him in the Fresno State Bulldog defensive backfield alongside another prized Bulldog player, Wily Robinson.

At FSU, Bob was an All-PCAA performer and twice earned PCAA Player of the Week awards and All-West Coast honors while playing a leadership role in the Dogs taking the 1977 PCAA championship and a 9-2 record. The sure-handed Glazebrook also handled the place kicks for his sure-footed teammate, the record-setting Vince Petrucci. As if that wasn't enough, the then 6'1" and 200-pound athlete was an outstanding special teams player with the true heart of a Bulldog.

Invited to play in the East-West Shrine Game, Bob was outstanding and, when the NFL called, he was drafted by the Oakland Raiders. It was 1978 and it worked out that Bob found an NFL home in Atlanta that year with the Falcons where his special teams play, especially his hard hitting, made him a favorite of the coaches and fans. He suited up for Atlanta for six seasons and still holds the Falcon record for most yards returned with a fumble for touchdown That play couldn't have come at a better time. It was late in the fourth quarter of a game against the New York Giants, with the Giant's leading 14-9 and looking to finish the Falcons off. When they fumbled on the nine-yard line, Bob picked it up and sent the fans into a frenzy as he raced down the field and gave the home team the victory. The Falcon's star was shining bright on that September day in 1982.

Bob's pro football summary for six seasons is typical of a dependable and hard-working player: buckets of sweat that don't show up on statistic sheets. Glazebrook started forty-two out of seventy-eight professional games that he played for the Falcons. While at Atlanta, he was credited with eight interceptions, six fumble recoveries and one touchdown. Another of the many multi-sport athletes that hail from the fields and courts of the Valley, Bob Glazebrook also played baseball in high school and college.