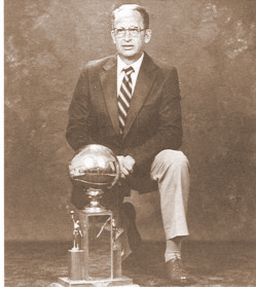 Boyd Grant was almost as excited about the Fresno State baseball team winning the 2008 College World Series as he was when his Bulldog basketball team won the National Invitational Basketball title in 1983. That's because Grant as a player, graduate, and former assistant coach at Colorado State, cherishes his years and the people of Fresno who jammed Selland Arena -"Grant's Tomb"- for the nine seasons that he coached at Fresno State. He is a true Bulldog. "In all my coaching experience, when my junior college [College of Southern Idaho] won the National JC Championship, [being] assistant in charge of recruiting at Kentucky, and the things I did and learned at Colorado State, I have to tell you the greatest experience for me and my family was Fresno State, without a doubt, no exceptions." It was quite obvious that the feeling was mutual when Boyd returned to Fresno and Selland Arena with a number of his players in 2003 to celebrate the 20th anniversary of the momentous NIT victory. Grant stood at mid-court, arms raised, while a crowd of 10,000 mostly red-clad fans gave him a standing ovation. In a voice choked with emotion, Grant said, "I love the Red Wave."

In nine seasons with the Bulldogs, nationally recognized for their tenacious defense, Grant had a 194-74 and his 1981-1982 team set a school record of 27-3. Grant's Fresno State athletic director, Gene Bourdet, knew Grant while he was the athletic director at Montana State when Boyd was serving as interim head coach at Colorado State while beloved head coach Jim Williams was ill. "We beat Montana State pretty bad and that's when I first met Gene. He kept track of me and the fact we made the NCAA that year," Grant said. "When I came to Fresno to interview for the job, Gene told me, “you know, Boyd, I've had my eye on you all the way. I remember the job you did when Coach Williams was sick and I've followed you since. So Gene gave me my chance to be a major college coach."

When Boyd was introduced to the local media in Fresno, they knew little or nothing about him other than he had a eye-popping 93- 6 record in three years at Southern Idaho. The biggest endorsement that day came from Jim Thrash, who was hired as an assistant and would be in charge of recruiting. He gave up a job as a high school coach in Albuquerque, New Mexico and turned down offers from other four year schools to join Grant. "Boyd is a great person and a great coach," Thrash said. "For me, it is a dream of a lifetime. I think it will be very easy to recruit first class players for him because he is such a first-class person." During the press conference Grant referred to Thrash as one "*of the finest young coaches in the country. I always thought I had the best coaching staff possible," Grant said. "I had Thrash for recruiting, Ron Adams for defense, and Fred Litzenberger.

Thrash lived up to his billing by bringing Rod Higgins- among others-from Chicago and producing a steady stream of top performers in ensuing years. It took Grant just four games to ignite the program and fans when the Bulldogs beat the University of California with a score of 60-55 before a packed Selland Arena. "That was the game that turned the program around, no doubt," Grant said. "I don't think people thought we had a team capable of playing with a Pac 10 team. We were behind with only a few minutes to play and Kenny Barnes stole the ball twice and we made all our free throws." Like the baseball team, Grant's 1983 NIT was pretty improbable.

After a single home game against UTEP won by Fresno, 71-64, the Bulldogs were on the road at Michigan State, 72- 58. They continued a successful road trip to beat Oregon State and moved on to Madison Square Garden where they toppled favored Wake Forest, 86-62. Few were not surprised when the Dogs knocked off tournament favorite, DePaul, 69-60. It was in New York that a Fresno Bee writer coined the phrase “Red Wave" when describing the 2,000 plus fans who made the trip to New York. Days after the team arrived home from the Big Apple to the applause of a parade crowd of ten thousand fans, athletic director Russ Sloan told Boyd that Pepsi had offered $20 million to build an on-campus arena that would seat 15,500 to 16,000 fans. Pepsi wanted exclusive rights to sell their product and they wanted the roof to be a giant Pepsi bottle cap.

Unlike today, Fresno State officials turned down the offer because the school frowned on having a company finance something like that. "Pepsi would have done it and it should have been done," Grant said. "I knew in order for us to maintain our program at a top level, we needed an on-campus arena. If we were to recruit the best players and go to the NCAA every year an arena was essential." In Boyd's first season, the Bulldogs were unbeaten at home in "Grant's Tomb. Boyd Grant's legacy remains unmatched in Bulldog hoops history.