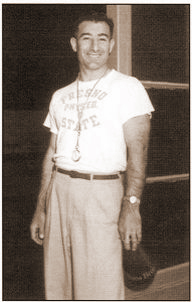 Few people have had such an impact on the so-called secondary sports programs at Fresno State than Dr. Ara Hairabedian, whom everyone called "Coach." He also could have been named "Mr. Olympian" due to his trips to six Olympiads starting with Mexico in 1968. He traveled to Munich in 1972, Montreal in 1976, Los Angeles in 1984, the Winter Games in Calgary in 1988, Atlanta in 1996, and Greece in 2004. Hairabedian taught a class on the ancient and modern Olympic games, wrote numerous papers on the various Olympiads, and acted as a guide to groups of people attending the Games.

The former captain, fullback, and linebacker at Roosevelt High School in Los Angeles was also All-City in high school gymnastics in tumbling and floor exercise events. He won the AAU national floor exercise in 1950 in Los Angeles. Hairabedian's brother, Tom related that after capturing the title, some skeptics said Ara won because the competition was in his home city of Los Angeles. However, he proved all the naysayers wrong at the 1951 Nationals in Detroit, where he had transportation one way and had to hitchhike home. Tom said Ara came in, collapsed on the sofa and went to sleep. The family was eager to find out the results, so when he awoke, they asked him, "How did you do?" To which Ara gave a sleepy reply: "Oh, I won." He was chosen to the All-American team both years as well. Twenty-two years later, he captured the Masters All-Around title, sweeping the floor exercise, parallel bars, rope climb and horizontal bar events.

Hairabedian received his B.S. degree from USC, completed his Master's at Penn State, and earned his doctorate at Stanford. He came to Fresno State in 1953, hired by then-athletic director Larry Pape who taught classes at USC, where Hairabedian attended. Pape thought he would fit in well at Fresno State, especially in aquatics, which was just being introduced. It was a good choice. By 1954, Hairabedian had formed both men's swimming and diving teams. In 1958 and 1959, he founded men's club water polo teams and by 1960 that sport was given an official Fresno State season.

While still coaching the aquatics teams, he founded gymnastic programs for men and women. It was interesting that the only swimming scholarship (a half-scholarship) my dad ever gave [was] to Art Ruble, who became the most outstanding swimmer in the history of the school," son Lance related. Hairabedian chaired the physical education department at Fresno State and hired outstanding track coach Red Estes.Sadly, Hairabedian, who always kept himself in top shape, died in 2005 from a heart attack.