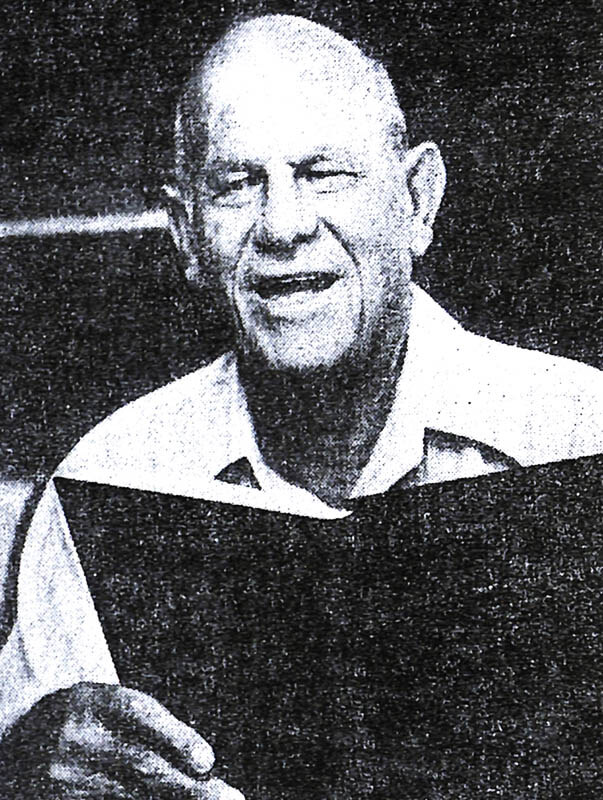 Public golf courses dot the landscape in Central Valley towns today, but the first never would have been created had it not been for the untiring work of one of California 's pioneering golf club professionals, Grant R. Halstead. The Visalia-born Halstead spent over forty-six years in the role of golf club professional including twelve years at Sunnyside Country Club and twenty-two years at Fresno Municipal which is now the Riverside Golf Club. Halstead's introduction to the game was as a caddie at eleven, earning fifteen cents an hour while carrying a small bag for J.C.Wade at the nine-hole San Gabriel Country Club in Alhambra that had sand and oil greens. Club professional Art Rigby at San Gabriel greatly impacted Halstead 's golf career. Rigby hired Halstead to retrieve golf balls from the rough around the course which is how he earned enough to purchase a mid-iron (similar to today's two-iron). Halstead learned the game with the mid-iron and practiced different types of shots with it, even using it to putt. The putting stroke came in handy and allowed him to finish in the top ten in the Los Angeles Open.

Halstead watched Rigby give lessons at San Gabriel and learned enough from careful observation to develop the smooth, almost effortless swing that enabled him to compete professionally from 1919 to 1927. He played in the first L.A. Open in 1924 at the Wilshire Country Club and also in the U.S. Open at Oakmont CC in 1927 where Bobby Jones completed the Grand Slam as an amateur. Halstead was promoted by Rigby to caddie master twice, once before World War I and again when Halstead was discharged from the Marines shortly after the war ended. He soon became the assistant professional. When Rigby left, Halstead was given the head job. His teaching skills attracted interest at San Gabriel and he earned a bonus for dropping one member's handicap from 100 to ninety in eight lessons. He also became an accomplished golf club maker with his hickory-shafted clubs. He worked in the shop and played afternoons with the members.

Fourteen years later, he applied for the head pro job at Brentwood Country Club. Olin Dutra was eventually hired which opened the job that Dutra had left at Sunnyside. Halstead was chosen for the position and moved his family - wife, Alberta, and their two-year-old daughter, Norma - to Fresno. Halstead took over Sunnyside as head pro in late 1928. The course had added a second nine holes just before Halstead started. In his twelve-year tenure, Sunnyside expanded from a small rural course to one of the most prestigious links in Central California. The course had few players from July to September because of the oppressive heat which gave Halstead an opportunity to hunt and fish with his close friend, Art Melville, head pro at Fort Washington Country Club. Meanwhile, the nine-hole Riverside Country Club ran into financial problems. Fresno Mayor Frank Holman, a Sunnyside member, asked Halstead what he thought about the city building a public golf course. Halstead said he thought it was a great idea and added, "You're looking at the guy who’ll run it for you."

In 1922, Riverside was on the banks of the San Joaquin River near the town of Herndon and was the only course in Fresno County. During the Depression, Riverside owners agreed to sell the course and an additional forty acres to the City of Fresno for $11,507. Halstead suggested to Holman that they contract noted golf architect Billy Bell, who had designed the Riviera Country Club in Los Angeles. Bell designed a challenging eighteen-hole course that had nine acres left for a practice fairway and also installed bent grass greens that were the envy of the clubs in the area for years. Holman hired Halstead as head pro and on November 1, 1939, the course opened for play. Halstead supervised the greens keeping and developed a maintenance system that made the course one of the best cared for in the state. He was responsible for all concessions in the clubhouse and coffee shop. Six years after it opened, Halstead was "in the black for the first time.

Golf was very inexpensive. Green fees on weekdays were fifty cents and a dollar on weekends. A monthly ticket for weekday play was $2 and every day was $4. A family ticket was $5.50. The working man finally was able to enjoy the sport which was previously for the wealthy and the public came by the hundreds and thousands. Halstead also moved the Fresno City Championships from Sunnyside and Fort Washington to Riverside and played the part of host with alacrity. He was well-known as the "Mayor of Herndon." Once Halstead retired in 1961, he spent much time at the large Palm Lakes driving range giving free advice to anyone who was struggling. In an attempt to simplify the game, he taught “no thinking golf" and a tool that he used was a piece of plywood with a brace on the back. He placed the ball a couple of inches from the board. If his student could swing without hitting the board, the ball went straight. His motto was: “To make it go far, hit it easy."

Halstead’s first wife died and he married Mae, whom he taught to play golf. The book Chicken Soup for the Golfer 's Soul included the story about Halstead, Riverside, and the hole-in-one that his daughter, Norma, made at fifteen. Halstead died in 1990 Just a few days shy of turning ninety-four.