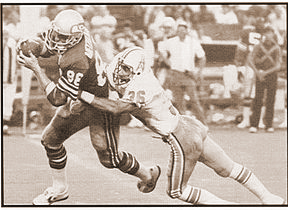 Carter Hartwig caught many passes. It didn't really matter whether he was playing offense or defense; his quarterback teammates, Randy Cerelli and Larry Ramos threw many passes that were reeled in by Hartwig. He also hauled in many interceptions from his cornerback and safety positions for the Central High School Grizzlies. In 1974, Carter was named The Fresno Bee's All-Metro Defensive Back of the Year and also starred in the annual Fresno City/County All-Star game. His high school stats were prolific. Hartwig caught ninety-two Grizzlies passes and broke the Central record with 1,876 reception yards, catching eleven passes in one game as well as forty-eight in 1973.

Carter Hartwig's days at Central brought in offers from colleges and he chose well. USC was looking for a defensive secondary man to complement Ronnie Lott as the Trojans were seeking another National Championship. In 1978, they found the right combination with Hartwig, Lott, and other stars, one of whom was also from the Fresno area, lineman Pat Howell.

USC went 12-1 in 1978, winning the Rose Bowl and becoming National Champions. Defense was a major factor for the Trojans as they allowed less than twelve points a game. The team had a record of thirty-one wins and just six defeats under head coach, John Robinson. In his senior year, the highly touted Hartwig had a great showing in the post-season Hula Bowl and the Senior Bowl. He was drafted by the Houston Oilers where he spent six years in the defensive backfield as well as running back kickoffs. His tenure there was during the Earl Campbell years, and once again with Pat Howell, another Oiler teammate.

Carter enjoyed playing in the NFL, especially with the charismatic Bum Phillips. Talking about the 6' and 200-pound rookie cornerback, Phillips said, "He is tough, he's intelligent, and he's real fast. I couldn't even think of anything to say about Hartwig that wouldn't be complimentary. I'd have to make something up." Carter settled in Fort Bend County, Texas, near Houston, and owned an auto glass business.