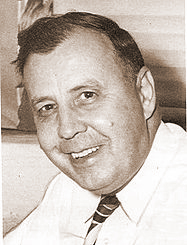 Vince B. Hayes was one of the true pioneers in California bowling history. Hayes earned the nickname, "Mr. First," because he was an adventuresome innovator. He was one of the State's first bowling proprietors, starting in Los Angeles and continuing in San Francisco before moving to Fresno in 1935 to open the Rialto Bowl on Van Ness Avenue.

Hayes was hooked on bowling in 1894 at Hyde Park High School in Chicago where he served as a pin setter for half a cent a line. When he reached California, he teamed with Gus Steele to win the inaugural Southern California doubles tournament in 1918. He was a member of the Schreiber Cement team which rolled a state record of 3,314 Series in Los Angeles that same year. His best three-game score was a 746 and another highlight was nineteen straight weeks with a 600-plus series. He was advised by many friends that opening a bowling house in Fresno was extremely risky because the temperatures of 100-plus for weeks at a time would keep people home. But what the naysayers didn't know was that Hayes was way ahead of the game and installed the first air-conditioned bowling house in the United States.

The Rialto was a success, but smaller than Hayes had in mind. He sold it in 1940 and drew up plans for the Playdium several blocks farther toward downtown-still on Van Ness- that opened in 1942. It was the first to have automatic pin-setters in the Valley. His final product in Fresno was the spacious Mid State Bowl with thirty-two lanes. Hayes was voted into the Central California Bowling Hall of Fame in 1964 and the Southern California Bowling Hall of Fame a year later. He died in 1974 in Santa Barbara.