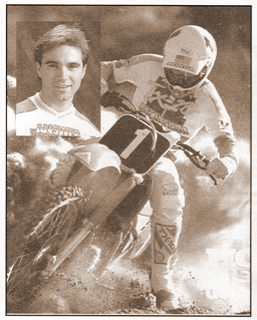 George Holland displayed his talent early when he won the Grand National 80cc Modified Expert Class Motocross at age eleven in 1977. But that was just the beginning for the Kerman resident, who became a legend in his sport before an injury forced his retirement prior his 25th birthday. By fourteen, Holland had won some 200 trophies and a Suzuki sponsorship. His successes quickly outgrew the family trophy case. In 1980, he jumped to the forefront of the sport with something no one else has ever been able to accomplish: he won every motocross in his age class during the National Motorsport Association Championships in Ponca City, Oklahoma.

Holland continued to triumph after turning professional in 1982 with a fearless performance that netted him AMA Rookie of the Year in the 125cc class at the Outdoor Nationals and the 250cc division in the Indoor Nationals. Forced to sit out the 1983 season with a broken leg, Holland returned to the top echelon of the sport in 1985, winning the 125cc Outdoor Nationals in Gainesville, Florida, and finishing third for the season in his class. These wins set the stage for a monstrous year in 1986. The highlights were two AMA victories and the 125cc World Motocross Grand Prix title in Suzuka, Japan. Now established as an international celebrity, he won three AMA events in 1987 and finished fourth in the 250cc Indoor Supercross Stadium Series.

Holland and other motocross super stars of his era paved the way for today's highly popular and equally dangerous X Games. In 1988, Holland showed no signs of the wear and tear on his body when as a member of the American Honda team, he captured four 125ce AMA events, the season championships and the coveted first place for the following season. He also rode bigger bikes often enough to place third in a 250cc Supercross indoor event. Holland's rocket-like rise to fame ended in 1989 when after taking the title at three national events and leading the season points total, he injured his left shoulder at Mt. Moris, Pennsylvania. This injury and a sore left knee gave him no option, but retirement.