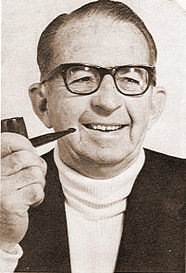 Howard Holman, a native of San Mateo, had a tough act to follow when he succeeded Raymond Quigley as the Director of the Fresno Recreation and Parks in 1950. Quigley was responsible for the large number of city playgrounds where many of Fresno's top athletes were developed.

Holman, who had a laid-back personality, served for twenty-four years, managing to fill Quigley's shoes and then some. When he arrived, there were seven public recreation centers along with nine elementary school playgrounds. When he retired in 1974, there were fourteen recreation centers and fifty-three school playgrounds. Some of the expansion was due to the growing population in Fresno, but Holman was involved in helping start Little League Baseball, Spartan Football, Youth Soccer, floodlighting tennis courts, and upgrading Riverside and Airways golf courses.

He was a graduate of Fremont High School and the University of California, where he played on the basketball team. Holman served three years in the U.S. Navy where he was involved in recreation activities. In the 1940s, he won the National Veterans Badminton Championship.