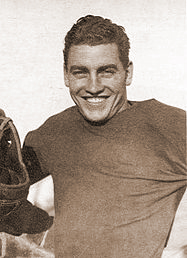 Jack Horner took a long trip to enroll at Fresno State College and he arrived just in time to play a major role on coach Stan Borleske's unbeaten 1930 Bulldog football team. Old-timers insist that he was the finest Bulldog "linebacker" of his era. Borleske received a tip from his brother about this big, fast, two- port, All-State high school star from Mohall, North Dakota and he recruited the 185-pounder, who was fast enough to run a leg on two Bulldog conference champion mile relay teams. A big backer with speed was a rarity in those days, so he was a load to tackle as a fullback and an excellent, hard-hitting linebacker.

In his senior year of 1933, he was the team captain and an honorable mention on the All-Coast team. He played for another Fresno Athletic Hall of Famer, Leo Harris. Horner once was pictured by Fresno Bee artist Art Buel as "Horner the Great." In addition to being an outstanding athlete, Horner was an honor student. Following his graduation from Fresno State, he went on to receive his Master's degree at the University of California. He landed his first job at Washington Union High School in Easton where he produced two league champion football teams in three years. Horner was on the coaching staff at Auburn Junior College until 1941 when America entered World War II and he enlisted in the Navy. He was discharged as a lieutenant commander and went on to become a highly successful general contractor in Manhattan Beach.