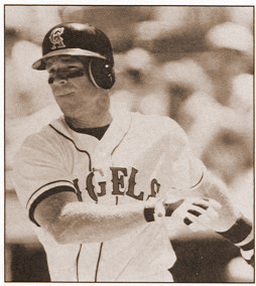 One of the best all-round athletes to hail from the Fresno area, Rex Hudler had a full-ride football scholarship waiting at Notre Dame, but chose baseball, drafting out of high school and signing with the New York Yankees. The 1978 Bullard High graduate played thirteen years on a six major-league teams after spending six years in the farm-club system. He became a TV and radio broadcaster for the Angels and formed a foundation to help children with Down Syndrome.

Hudler, nicknamed "Wonder Dog," was known for his enthusiasm and competitiveness. He was an All-American wide receiver at Bullard- but his best sport may have been soccer. As his high school days came to a close, Hudler had to choose: a full-ride scholarship to play football for the Fighting Irish or a signing bonus from the New York Yankees. Hudler chose baseball.

With Hudler's desire, enthusiasm and natural athletic ability, he was a cinch to succeed. "I believe he could have played pro in any sport he wanted to," said Teddy Papulias, a Bullard football and soccer teammate. "Out on the fields, it was like he could do anything he wanted to and he had the uncanny ability to be able to come up with the big play to win a game. In 1984, the Yankees drafted Hudler in the first round, but it took six years in the minors before he made it to "The Show" in Yankee Stadium. He played for the Yankees, Baltimore Orioles, Montreal Expos, St. Louis Cardinals, California Angels, and the Philadelphia Phillies. In 1993, Hudler joined the Japanese Yakult Swallows, where he was a fan favorite and helped the Swallows to the Japan Series championship.

During his professional baseball career, Hudler mostly played second base, but had experience at every position except pitcher and catcher. He competed in 1,083 minor-league games and 774 major-league games. In the majors, he was a career batting average of .261, collected 461 hits, and fifty-six home runs. The sure-handed Hudler compiled a .972 career fielding percentage, never committing more than six errors in a season. All told in his pro career, he played for twenty-one years with eighteen different teams. "Rex was a great teammate," said Steve Ellsworth, who pitched for Bullard High and the Boston Red Sox. "He never let us down and he always gave 100% and that made it easy on the rest of us to do the same."

Throughout the minor leagues, Ellsworth said Hudler had the same effect on his teammates. "The one thing different was that his own teammates loved him, but other teams didn't like him very much at all. He was a great bench jockey and he could really get under opponents' skin," Ellsworth said. "In games, he liked to challenge opponents, like 'Hey what you got? Let's see it to egg on base runners to try to steal second or whatever."Papulias added, "Even in practice, Rex was always intense. And it made us all play better." Hudler's popularity did not stop when he hung up his cleats. He began his broadcasting career as a correspondent with ABC's Good Morning America, covering the 1997 American League playoffs and World Series that year as well as the 1998 Super Bowl.

In 1999, Hudler returned to the California Angels, this time as a radio and television color commentator alongside Steve Physioc's play-by-play. In 2003 and 2005, the Southern California Broadcasters named him Television Color Analyst of the Year for his work on the Angels' broadcasts for KCAL and Fox Sports Net. He also won an Emmy and was featured on ESPN's 2004 MLB video game, Sega's MLB 2K3 video game and the 2006-2008 versions of MLB The Show video game. Hudler was active in various baseball clinics and sought after as a motivational speaker all over the country. He and his wife, Jennifer, founded "Team Up for Down Syndrome" to help support the Down Syndrome community nationwide. Stillpoint Industries honored the Hudlers with the 2007 Humanitarian Award.