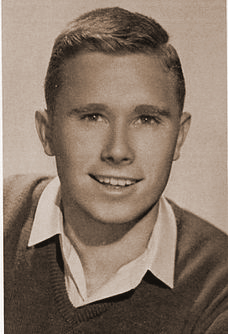 Tennis icon Lary Huebner has been closely associated with every aspect of the game of tennis for most of his life, but ask him to name his favorite sport and the answer will be basketball. However, when he had to choose in his freshman year at UCLA, tennis was the obvious and smartest choice. He still played championship tennis more than fifty years since he engaged in a serious game of basketball. He also coached, worked in, and then owned a sporting goods store featuring tennis, built tennis courts, and authored a book on how to teach tennis.

In 2003, Larry won the national Father-Son Doubles title with sons, John and Jim, and the Father-Daughter title with daughter, Karen. As a reward for this extraordinary effort in a single year, the United States Tennis Association flew Larry and his wife, Gretchen, to New York in 2004 where the Huebner family received the Tennis Family of the Year Award. In 2005, he added the Grandfather-Grandson National title with John's son, Chase, a member of the Los Gatos High School team."I am more proud of the family championships than the NCAA championships [doubles and two team titles] at UCLA," Huebner said. "I really am. My only regret is that I didn't play basketball for John Wooden when I felt I could Have."

Basketball coach "Barkin" Joe Kelly at Fresno High taught Huebner, an All-City guard, the fundamentals of the game. It was Wooden who expanded on that, but taught him how to live a life with the right priorities. He had a close relationship with the legendary ex-Bruin coach and kept him supplied with homemade jams and jellies. "John was such a mentor and role model."