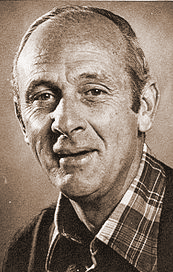 Stu Inman has done just about everything you can do with a basketball career except own a team. Born in Alameda, Inman played basketball for Alameda High School and San Jose State College; coached at Madera and Roosevelt High Schools, Santa Ana Junior College, Orange Coast JC and San Jose State; and was chief scout, interim coach, and general manager for the Portland Trail Blazers of the NBA. Inman ended his career as the director of player personnel for the Milwaukee Bucks and Miami Heat.Inman's direct connection to the Fresno Athletic Hall of Fame is as one-time coach for the Madera Coyotes in 1951 and Roosevelt Rough Riders from 1952 to 1953. While that may not seem a high recommendation for selection, his additional coaching forays at Santa Ana, Orange Coast, and San Jose State fatten his résumé to merit plenty of applause.

Stretching 6'5", Inman set individual scoring and rebounding records at San Jose State from 1947 to 1950 as the Spartans became California Collegiate Athletic Association (CCAA) champions in 1947-1948 and 1948-1949. Inman set a single-season scoring record with 521 points in 1950, a mark that stood for thirty-four years, and racked up 1,504 points for a career record that lasted thirty-eight years. He was a three-time All-CCAA selection as the Spartans made their first two National Intercollegiate Athletic Association (NAIA) Tournament appearances in 1947-1948 and 1948-1949. Inman coached Santa Ana to 5-12 and 14-11 records before producing an 18-9 Eastern Conference Co-Championship team at Orange Coast.

Stu returned to Prune City as head coach from 1961 to 1966, succeeding Walt McPherson and producing four winning seasons. Inman also joined pals Pete Newell, ex-University of California at Berkeley coach, and one-time Madera High athlete and Portland State coach Jack Avina, as they conducted basketball camps in Europe, Asia, and Australia. His imprint with Portland started in 1970 as chief scout and he then became president of player personnel. His behind-the-scenes value began to draw attention as the Blazers won their only NBA crown in 1977. They called Inman "The Shadow" and he never claimed proper credit for being the architect the Blazers' court success. For example, eight of his draft selections won All-NBA rookie honors.

Portland, at a cost of $3.7 million, began NBA play as one of three expansion teams in 1970-1971; Cleveland and Buffalo were the other two new additions. Inman was the first scout. In 1972, Inman was the interim coach until Lenny Wilkins took over in 1974-1975. Bill Walton, a three-time NCAA Player of the Year, became a team member in 1975 and Jack Ramsey replaced Wilkins in 1976. Portland's fans went nuts beginning April 8, 1977, as the Blazers went on a string of 814 consecutive Memorial Coliseum box office sell-outs, the longest in the history of professional sports. Their 49-33 regular season was capped when the Blazers won the NBA playoffs against the Julius Irving-led Philadelphia 76ers.

Throughout his director of personnel duties, Inman was considered to be a hoop sport genius. He possessed a sixth sense when it came to selecting players for Portland. He was widely admired for his skill in detecting outstanding emotional as well as physical qualities in athletes. He brought in many great stars over the years, but there was one draft choice he would like to have again: the second pick in the 1984 draft when he passed on Michael Jordan and chose a center that the Blazers needed, Sam Bowie. So you can't win them all, but Stu Inman has won a lot of them.