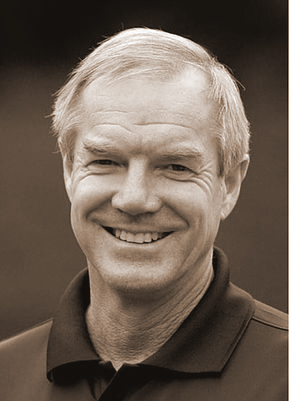 The Janzen name is synonymous with women’s volleyball, national championships and Fresno Pacific University. But even more impressive than his five NAIA titles and the coaching of 62 All-Americans is the fact that 96 percent of his volleyball players had graduated at the time of his induction into the Fresno Athletic Hall of Fame.

Under his guidance, the Sunbirds became the dominant force in NAIA volleyball, with 16 Golden State Athletic Conference championships, 12 regional titles, 12 national Final Four appearances and the five national titles (1989, 2003, 2007-09). In 2003, he was inducted into the NAIA Hall of Fame in the coach category. He has coached two NAIA Players of the Year: Tracy Ainger (1996) and Shu Liu (2007-2008).

Fresno Pacific wrapped up its first unbeaten season in 2009 with a 3-0 victory against Georgetown (Ky.) in the NAIA title game, and Janzen was named NAIA Coach of the Year for the fourth time. From 2005 through 2009, the Sunbirds just lost five games. Janzen’s record through 25 seasons at Fresno Pacific was 835-166.

The Reedley native’s impact on the sport extends beyond the San Joaquin Valley and the NAIA. He has assisted in the development and training of the U.S. Men’s Olympic volleyball team, been an assistant and head coach at the U.S. Olympic Festival and a men’s assistant coach at Penn State and USC.

In addition to coaching volleyball, Janzen also helped build an all-around sports program as Fresno Pacific’s athletic director. He was honored in 2009 as the GSAC Athletic Director of the Year. And he has participated in the NAIA’s Champions of Character initiative as a certified instructor.

Janzen graduated from Reedley High School in 1970 and, after two years at Reedley College, graduated from Tabor (Kansas) College. He completed his master’s degree in Physical Education at the University of Northern Colorado in 1980 and earned a Ph.D. in Sports Psychology at USC in 2004.

Says Janzen: Fresno Pacific "gave me a unique opportunity way back in 1983, and I’m very appreciative of that. I’ve been fortunate to work with some of the best folks I could ever imagine. We’ve been blessed with some great student-athletes over the years who have enabled us to build something special here."