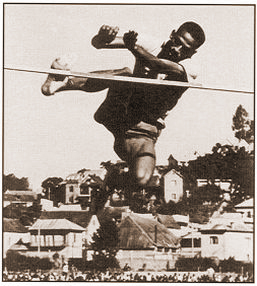 Gene Johnson, the former Edison High School, Fresno City College, and University of California star, was the first high jumper in the world to leap over 7 using the western-roll style, eventually hitting a personal best of 7'2 3/4". Johnson was number one in the United States in 1963 and was world-ranked from 1962 through 1966. He won the Pan-Am Games in Brazil and finished second to world-record holder Valeriy Brumel during the U.S. vs. Russia meet in Moscow during the Cold War in 1963. Johnson finished second to Brumel a number of times and liked to say, "I scared him to several records."

Johnson was in junior high watching an Edison High meet when he became interested in high jumping. His brother, Spencer, was jumping about 5'8". Johnson decided to try and sailed over the bar. "That was the start of my western-roll style, just by watching," Johnson said. "I progressed and in high school, Frank Fletcher became the coach and he was a good one. I jumped something like 5'10". In my senior year, I went to the state meet. I finished fifth." Future jumping stars like Joe Faust and Paul Stuber were jumping 6'8" or 6'9" and Johnson was at 6'2". He advanced to 6'6 before entering Fresno City College, where in his first meet he cleared 6'8", establishing him among the best junior college jumpers in the country. He also played basketball at City College.

At Fresno City, Johnson was part of a team that challenged perennial power Allan Hancock. Along with Johnson, the Rams included John O'Leary, Joe Lee, Tom Jacobson and John Malone. But a career-ending knee injury to Malone spoiled any chance to beat Hancock, Johnson later stated. Johnson's future was decided when the Rams met the Cal freshman and he won the high jump at 6'7". Venerable California coach Brutus Hamilton recruited him, although Fresno State's Dutch Wamerdam and UCLA's Ducky Drake also made offers. "The clincher was I had family in Berkeley and I knew where I could get a free meal and Coach Hamilton was such a great gentleman and coach, so it was an easy choice. I enjoyed Cal. I'm glad I went there," Johnson said. In 1963, during a meet at UCLA, Johnson jumped 7" for the first time. Second place was future Olympic decathlon star, C.K. Yang.

Johnson and other premier high jumpers from the U.S. got a glimpse of the future of high jumping, even though they didn't realize it at the time. Johnson, John Rambo, Ed Caruthers, and Bob Hoyt watched a young high schooler named Dick Fosbury use a new technique to jump 6' 10". But Johnson and the others were already in the seven-foot-plus club. “Perhaps had Dick Fosbury jumped higher that night, we might have taken a little more notice," Johnson said. "Had he made seven feet or so we may have said, 'Maybe this is something we better look at more closely. Whatever, two years later, he had the gold medal in the Olympics and the high jump was changed forever. Then the flood gates opened and it seemed everyone went to what was called "The Fosbury Flop.' I think it was an easier jumping style, but I don't care what style you use when you jump 7'8", that's getting up there."

While track and field gave him the opportunity to see the world, Johnson said he regretted not making the 1964 Olympic team. He recalled his missed opportunity jumping at Randall's Island in New York: "I don't know how I knocked that bar off at 6'11", but I did. I was told I still had a chance to make the final trials, so every time I jumped 7’ or higher, I sent a clipping to the Olympic Committee. I just knew I would make the trials and I waited for a call. Finally, the Olympics were on and I was still in Berkeley and no call came." Still, Johnson was one of the premier high jumpers in the 1960s and the fourth American to reach seven feet.