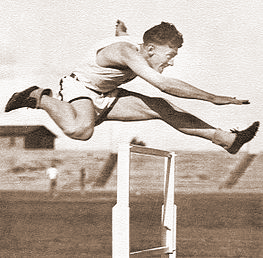 In 1930, Charlie Kaster capped a great career as a hurdler when he competed in the British Empire Games as a member of the U.S. shuttle hurdle relay team. In his leg, Kaster held off the British champion, David Burleigh, to help the U.S. team to victory in the World record time of 59.1 seconds.

During his college career, Kaster dominated the Far Western in the hurdle events and was the top point winner for the FSC Bulldogs as he competed in four or five events a meet.

Dink Templeton, one of the early track greats of the nation, called Kaster “the greatest form hurdler in history.” Kaster was born in Missouri and came to Fresno in 1922. A veteran of World War II, he spent the latter part of his life at the California Veterans Home in Yountville where he passed away in 1966.