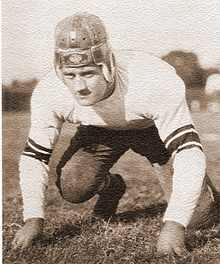 Eligibility rules were a little different when Fowler product John "Casey" Kazanjian played two years at fullback for the first two football teams in Fresno State history. Three years later, he enrolled at Stanford University and played guard for two years. Today, he would have had to complete his four years in a five-year window and probably would have lost a year on the transfer rule, but those were the days when colorful St. Mary's coach Slip Madigan used to pick up players at various locations when the train carrying the Gaels would stop en route for games in the Midwest or East Coast.

Kazanjian was a one-man gang at Fowler High School where he won sixteen letters while participating in the football, baseball, basketball, and track squads. The late Emory Ratcliffe, who helped Arthur W. Jones, with Fresno State's first grid team in 1921, insists Kazaniian could have played fullback on any Bulldog team and was one of the best all-round athletes in the school's history. Ratcliffe's words carry more credibility after what Casey achieved at Stanford. The opposition at Fresno State included high school and junior college teams. Stanford played a strong schedule including bowl games. For all his heroics achieved at Fresno State, Stanford, and later at the San Francisco Olympic Club, Kazanjian gained more publicity in 1,200 professional wrestling matches during a seven-year career.

He was a headliner at Fresno's Ryan Arena, also performing in Madison Square Garden and the Boston Garden. Kazanjian was built like a bull and played sixty minutes for every Fresno State game except one when he sustained a knee injury. Casey was a member of the two Indian Bowl teams but according to statistics in The Rose Bowl Game by Rube Samuelson, Kazanjian didn't get playing time in either game. He did toss the sixteen-pound shot for Stanford and won the Pacific Association championships in 1928 and 1929 in the shot put and hammer throw. He was second in both events at the AAU Nationals. Kazanjian found a home in the four-cornered ring in wildly popular professional wrestling. In 1936, he retired from athletics and became a rancher in the Exeter area, growing peaches, grapes and oranges.