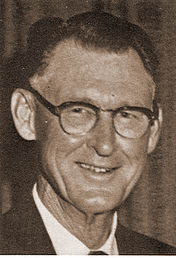 Born in Oklahoma in 1898, Ermest Lauck moved to Fresno at two and said he can't remember a time in his life that he wasn't interested in anything with wheels. That early spark became a passion when Lauck was involved in building race cars and race tracks. Because of his innovative ideas, admirers said Lauck was way ahead of his time. When midget race cars captured the attention of fans, Lauck was building them. Midgets proved to be the incubators for many well-known Indianapolis 500 champions when "The Brickyard" was the biggest event in racing. In 1934, he built his first midgets for famous local drivers like Dutch Van Tassell, Duane Carter, and Bryce Morris. Lauck sold Morris' car for $175 to Fred Gerhardt who installed a Drake engine, put Billy Vukovich behind the wheel, and dominated the California midget circuit. Not content with just building cars, Lauck went into partnership with Curly Boyde to build a banked track on the north side of Kearney Drive near Chandler Field. One year later, Lauck headed a group who bought property across Kearney Drive and laid out the track which became Airport Speedway. The name changed first to the Italian Entertainment Park and then to Kearney Bowl where people packed the stands to watch the midgets.