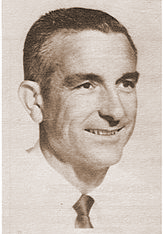 This man did it all and did it well. Lawless was a player, student, coach, official, administrator, and a motivator. In May 1963, this native Fresnan succeeded James "Rabbit" Bradshaw as head of the city schools' physical education department. One year later, he died at the young age of forty-six following an operation for a brain tumor. The Toby Lawless School was dedicated to his memory in 1981.

Lawless was only 5'10" and 155 pounds when he played halfback on Bradshaw's Fresno State football team. He played soccer at Lowell Junior High and was hit in the eye by a soccer ball, costing him seventy percent of his vision in one eye. He never used that as an excuse and was a four-varsity letterman at Fresno High in his senior year. He was acclaimed to be the finest basketball player in the county and was AlI-City in football and baseball.

At Fresno State, he played three years of football and baseball and two of basketball. He graduated in 1940 and was named the outstanding man in his class. The following year, he was hired to coach baseball and basketball at his alma mater, Fresno High. His 1941 baseball team won the Valley Championship and, in 1942, he entered the armed forces and played basketball and baseball for Lemoore Air Base and the March Field Flyers. He was discharged in 1946 and returned to Fresno High as the head baseball coach. Lawless was named head football coach in 1949 and his Warriors were 6-1-2. His baseball team won the Yosemite League. In 1950, the Warriors were 7-2. Lawless was one of the top local sports officials and became one of the youngest officials in the Pacific Coast Conference.

He went into school administration in 1956 and, by 1959, was appointed vice principal at Edison High. Lawless had a lively personality and a stubborn character which is how he earned his nickname; they said he had the same bents as the mule "Old Toby" on the ranch where he lived in his early years. Lawless was a fun guy to be around and devised a "gotcha" golf tournament, where players were allowed to talk or yell in the middle of a player's back-swing or putt.