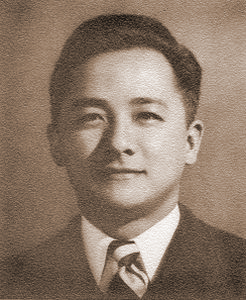 Dr. Sammy Lee was born in Fresno on August 1, 1920 to Korean-American parents. In 1932, the Olympic Games impressed him so much, he told his father that one day he would win an Olympic gold medal. His father said, "In what?" to which young Sammy replied, "I don't know yet, but I will find it." By the time he was a teenager, Sammy had found the sporting event in which he would accomplish his Olympic dream. Diving was his life's work and he excelled despite encountering prejudice. There were occasions when it wore him down and he almost felt ashamed of his heritage. "My father set me straight when he could see what was bothering me," says Sammy. "He said, 'Son, if you are not proud of the shape of your eyes or the color of your skin, how can your classmates respect you?'" Sammy says he has kept those words close to his heart throughout his life. He felt that no goal would be impossible.

In a short amount of time, Sammy was working his way to winning many championships in California. Because of the World War II military effort, the Olympics were suspended in 1940 and 1944, so Sammy had to wait until the 1948 Games in London to realize his dream. While a student at Occidental College, Sammy won the National AAU championships in the platform and springboard diving events. By the time the 1948 Olympics came around, Sammy had secured his pre-medical degree from Occidental and was a recent graduate of the University of Southern California Medical School. At twenty-eight, Dr. Sammy Lee was ready to come back and stake his claim. Due to a promise that he made to his father to complete medical school, Lee had not competed in more than three years in a diving competition. This fact made it even more amazing that he not only qualified for the 1948 Games, but he went onto the world stage in London, winning the gold medal in platform diving and a bronze medal in the springboard event. He became the first Asian-American to win a gold medal for the United States.

Sammy Lee went back to the Olympics in 1952 in Helsinki, Finland at the age of thirty-two and won another gold medal, becoming the first athlete ever to win back-to-back gold medals in diving. In later years, he was a coach to the U.S. Olympic stars as Pat McCormick, Bob Webster, and Greg Louganis as they made their way to the gold medal stand. Sammy also served on the President's Council of Physical Fitness, working under five U.S. presidents. Standing five feet, one inch tall with his degree in medicine, his three Olympic medals, many national and international championships, a truckload of awards including induction into the Olympic Hall of Fame, the International Swimming Hall of Fame, and the U.S. Olympic Hall of Fame, Dr. Sammy Lee calmly says that he just always believed in the positive. "Don't get to thinking, I can't," he tells young people today. "No goal is impossible. Remember, the last two words in American are, I can. Never let anyone diminish your dreams."