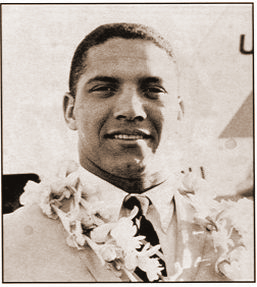 David Lewis was an All-Pac10 quarterback whose college career included leading Stanford University to victory in one of sports' greatest traditions, the Big Game football rivalry between Stanford and the University of California, Berkeley. In the 1964 match-up, Lewis, a sophomore, completed five of eight passes for 92 yards as the Stanford Indians (later changed to the Cardinals) won 21-3. Lewis also put his toe to a punt that reportedly sailed 75 yards, although it is not listed among the official National Collegiate Athletic Association record punts.

Lewis was a real American Indian who graduated from Clovis High School in 1962 via the Auberry Indian Mission. Lewis' family descends from the Central San Joaquin Valley's Chukchansi Yokotch Tribe. Lewis, at 6'2" and 216-pounds, was a standout in football and basketball for Clovis High as well as in college and the starting quarterback in the 1966 East-West Shrine Game. He was selected in the fifth round of the 1967 National Football League Draft by the New York Giants as the 109th overall pick. Lewis began his professional football career with the Montreal Alouettes of the Canadian Football League, showcasing his versatile talents as a quarterback, receiver, punter, and defensive back. He signed a contract with the Cincinnati Bengals, who were more interested in him as a punter than a quarterback. He played for the Bengals from 1970 to 1973, leading the NFL in punting in 1970 and 1971. He averaged 46.2 and 44.8 yards per punt, respectively. He dropped off to 42.1 yards per kick in 1972 and 41 yards in 1973. Lewis' four-year career totals with the Bengals boiled down to 285 punts in 56 games for 12,447 yards with a 43.7 yard average. His longest kick was a 63-yarder in 1970 and, most significantly, he never had a punt blocked during those four years. Lewis' punting proficiency paid off with big dividends, not only financially, but with individually bestowed honors. He was named to All-Conference and All-Pro First Teams in 1970.