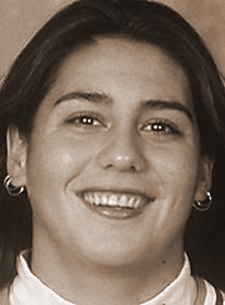 As a senior second baseman in 1998, she hit the most famous home run in Fresno State history -- a no-doubt-about-it shot to left field in the sixth inning that propelled the Bulldogs to a 1-0 victory over top-ranked Arizona and the NCAA Women's College World Series softball championship.

Amplifying the drama was the fact that Lindenberg's home run came off Nancy Evans, the winningest pitcher in NCAA history, and snapped a 29-game Arizona winning streak. Lindenberg explained, as the Bulldogs celebrated in Oklahoma City, that Evans had fed her inside low riseballs in their previous meetings. "It was time for me to send one over," she said.

The Bulldogs were accustomed to such heroics from Lindenberg, who batted .440 in three seasons at Fresno State and etched her name all over the school record book.

Lindenberg, who grew up in Anaheim Hills, came to Fresno State Coach Margie Wright's attention when she hit a home run that sparked the United States -- coached by Wright -- to a victory over Japan in the gold medal game of the Junior World Championships. Later that summer, Lindenberg played for the North team that defeated Wright's East team for the gold medal in the U.S. Olympic Sports Festival.

But after graduating from Canyon High School, she played her freshman season at Long Beach State, where she batted .324. Eager to play for a higher-caliber program, Lindenberg transferred to Fresno State for her sophomore season. It proved to be the right choice. She was a three-time All-American, a two-time Western Athlete Conference Player of the Year (1996, 1998), WAC Female Student-Athlete of the Year (1996) and twice made the All College World Series Team (1997-98).

Lindenberg also continued to make her mark at the international level. She was a member of the U.S. National Team in 1995, 1997-99 and 2001-03. She helped lead the United States to the gold medal at the Pan American Games (2003) and at two International Softball Federation World Championships (1998, 2002).

The headline on a story heading into Lindenberg's sophomore campaign at Fresno State proclaimed, "Lindenberg hopes to connect for “Dogs." She connected again and again -- capped by the biggest home run of all.