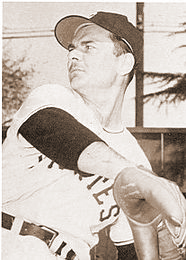 Victor Lombardi was born in Berkeley, but moved to Tulare at an early age. Though small in stature, he became one of the finest high school pitchers in the Valley. The late Hall of Fame coach Pete Beiden recognized the potential of this 5'7", 150-pounder at Tulare High School and fine-tuned his left-handed pitching motion which eventually led Lombardi to a six-year career in the major leagues. Lombardi pitched Tulare to the Valley Championship, beating big Ed Flynn and the Fresno High Warriors in the championship game. As the supremely confident Lombardi told me, "I beat them all. "Lombardi was drafted shortly after graduating and spent three years in the armed forces. He returned to Fresno in 1944 and pitched for the strong Roma Wines semi-pro team. Lombardi signed with the Brooklyn Dodgers and, after a year with Bakersfield of the California League, he made it to the big club in 1945. In three seasons with the Dodgers, he won thirty-five and lost thirty-two games. Lombardi was the starter twice in the 1947 World Series against the New York Yankees. He lost the first game, lasting just four innings. Lombardi pitched two innings in his final start, but the Dodgers won that memorable game when Al Gionfrido made a miraculous catch of Joe DiMaggio's drive at the 407-foot sign in center field with two Yankees on base. Lombardi was a major factor in the Dodgers winning the National League title in 1947 with a 12-11 record and a 2.99 ERA. He was 3-1 in relief roles with three saves. His 1946 ERA was 2.89. Lombardi said even though he lost the first game, it was a great honor to be selected as a starting pitcher in the World Series. He finished his major league career with the Pittsburgh Pirates. In three seasons, he was 15-19. When he returned to Fresno after the 1950 season, Lombardi quit baseball and turned to another game with spikes, golf. He had taken up the sport in the off-season while playing baseball. There were not that many left-handed golfers in those days, but Lombardi won two national left-handed golf championships. He was later hired as head professional for the Palm Lake Golf Course in Fresno and became a competent golf teacher. Lombardi died December 3, 1997.