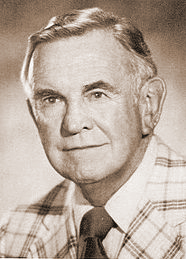 MacDonald spanned the entire gamut during his forty-five year association with high school athletics. His career began as a coach at Fowler High School in 1933. He moved into the Fresno school system in 1934. He was the line coach for Erwin Ginsburg at Fresno High School for several years and then became the athletic director and later became principal of Edison High School from 1946 until 1964. In 1964, he accepted a three-pronged position with Fresno City Unified School District which included being the director of physical education, the commissioner of athletics, and the coordinator of a noon time assistant's program. Four years later, he gave up those tasks and took the post of Central Section CIF Secretary. He died in 1978 just a few weeks from his announced retirement. MacDonald was a graduate of Occidental College and did post-graduate work at the University of Southern California. He served in the U.S. Navy during World War II.