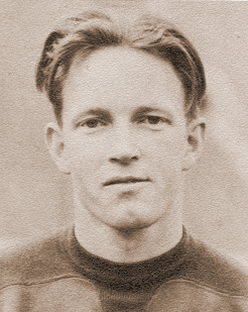 How could a youngster whom the Mono Indians nicknamed "Panther Foot" evolve into a world record high jumper? First, there was coaching by Julius Trombetta at Fresno High School where Walter Marty burst onto the scene and out-classed all of the Warrior high jumpers. At that time, he was using a scissor-kick technique. Trombetta taught him the Western roll and Marty set a national inter-scholastic record of 6'4" in the Fresno West Coast Relays while competing for the Warriors in 1929. The mark stood for twenty-three years. The next step was at Fresno State College under the coaching of J. Fint Hanner. Marty easily cleared 6'4" as a freshman. By 1954, Marty set a world outdoor record of 6'8"" to erase a nine-year standard set by H.M. Osborn of Illinois. Again at the WCR, Marty upped the standard to 6'9" with a 6'9" jump disallowed in a Fresno State dual meet because no AAU officials were present.

Marty broke the indoor record that same year, clearing 6'8". He won the NCAA high jump title and tied for first in the AAU meet with a high school boy named Cornelius Johnson. Before Marty graduated from Fresno State. Johnson had eclipsed his high school and world records. Marty's son, Ryan, shared something that he had never seen printed: "Dad was through [with] jumping before I was born, but he told me a story which he felt was the key to his world record jumps," Ryan said. "Dad was a great hunter and fisherman and he got his nickname because he moved so quietly in the woods. One day, he was deer hunting and spotted this big buck. He knew the path the deer was on, so he ran around a boulder and was almost set when the buck jumped right over the top of him. He watched in awe and when the buck was at his highest, he arched his back in midair and went even higher. Dad said he incorporated that extra push into his Western roll." Ryan Marty, an outstanding photographer at the Fresno Bee, said his father was born in North Fork, but the family moved to the settlement of Hilldreth, a mining town close to O'Neal's on the Ryan Ranch. Marty's family said Walter never came to a fence that he didn't jump over. During the annual Hildreth rodeo, Walter would jump over two parked cars. He also ran up and down the hills around his home and developed powerful legs and speed. Ryan was an eyewitness to Walter's strength and sure- footedness. "My dad would jump across these big boulders with crevasses with fifteen to twenty foot drops into a creek if he missed. He would tell me to run and jump as far as I could and he would snatch me out of the air. I was pretty young then and very scared. I just knew he would miss me one time and that would be it, but he never did. He was agile as a cat. Finally, when I was sixteen or seventeen, we were crossing a river and he told me to run and jump. I told him I was too big now. Sure enough I jumped, he caught me, and we both went into the river. We lost some of our fishing lures which we recovered by diving for them. We both laughed hard [about] that one."

Classmate Kermit Koontz said that he and Walter worked for Blosser's Sporting Goods Store in the off-season. "The store would get some new fishing rods and, when business was slow, Walter would go out in the parking lot and start seeing how far he could cast. He always drew a crowd," Koontz said. "I recall him telling me about fishing in the river and he was looking for a rock to jump to. He found one and jumped nearly twenty feet. He landed on the rock with his fishing rod, but then was stranded and almost drowned getting back to shore." When Walter was in his late seventies and early eighties, he would come to Ryan's fish operation and be out in the water in his hip boots with a net helping with the harvest of small and large fish. "He was an incredible shot and an amazing fisherman," Ryan said. "That's where I got my training and I couldn't have had a better teacher.

"I've always thought that his life story would have been a great movie." Legendary University of California track coach Brutus Hamilton and Finnish mathematicians concluded after a long study, "Neither Marty nor any other human being would jump seven feet; it was impossible."Hanner said he thought chances were remote unless a new technique was devised. Six years later, the belly roll was introduced and jumpers could lead with their head. It was still twenty years before someone topped that magic mark. Hanner had no doubt that with the belly roll, Marty would have been the first seven-footer. As it was, Marty was the greatest high jumper in Bulldog history. Just as Dutch Warmerdam made history with a bamboo pole, Marty is the only Fresno State jumper with a world record.