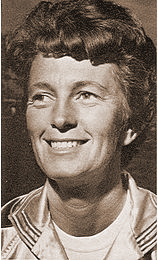 Gloria May, one of the finest fielders in women's fast-pitch softball, played for the Fresno Rockets from 1949 to 1958, winning three national championships. Originally from Glendale, May had an eighteen-year career in softball, making her mark as a first baseman. She was inducted into the Amateur Softball Association Hall of Fame in Oklahoma City in 1973 and had a perfect fielding percentage in ten of fifteen national championship games. "I was an average hitter. Basically, I was known for my defensive play," May said. She earned All-American honors three times and was a second team pick twice.

May also excelled as a pilot, competing in cross-country air races. She said highlights of her softball career include the National Championships and selection to the Hall of Fame. She regrets not having the chance to represent the United States in the Olympics. "That would have been such a thrill," May said. While softball players from May's era often talk about the crazy cross-county car trips, May remembered a terrifying plane ride during a thunderstorm over the Midwest. Lunch boxes were flying and passengers screaming. "We went into a nosedive and you could feel the color disappearing from your face," she said. "The pilots were battling and finally, it was a gradual thing and we pulled out, and down below, I could see lights." During the turbulence, a baby flew out of his mother's arms, but was caught safely. A flight attendant broke an ankle and passengers had to pick their way through debris before getting off the plane. She said the captain stood at the bottom of the steps as they disembarked, his shirt drenched in sweat. "We were given drink tickets when we got off the plane and I think everyone used them," May said. While she said the trip exacerbated some of her teammates' fear of flying, it did nothing to diminish May's fascination with airplanes. As a child, May lived across the street from the Grand Central Air Terminal. She began racing airplanes in 1981.

May and many of the women from the Rockets have remained close through the years, forever connected by the unique era in which they played. The Rockets and their competitors were in many ways pioneers for women's sports, providing an avenue for women to excel in athletics at a time when there were few opportunities. "I feel fortunate to have played in that era," May said. "I played against the best and with the best there will ever be."