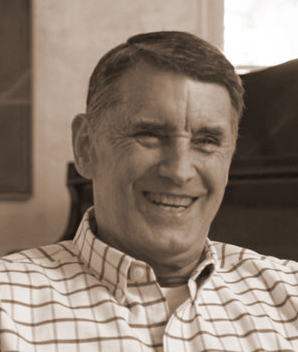 When Mike Mealiffe and his twin brother, Pat, were growing up in Santa Clara, the twelve-year-old boys were active youngsters. One of the things that they loved was going to the municipal pool. Noticing the athletic abilities of the boys, swim coach George Haines suggested that the Mealiffe twins try out for the team. After talking it over with their parents, Michael and Pat took a shot at it. It was fun, but it was also hard work and took a lot of time. The boys had other ideas for summer fun and oftentimes would go to the pool right after school, dunk their hair in the water to get it wet, and then go play. The reason for that was that their mother would smell their hair when they got home to make sure they had gone to practice, the old chlorine trick. "That didn't last long,"remembers Michael today, "We finally gave in and got serious about it. Whenever we would start to get bored with it, our parents would say if we kept swimming, maybe someday we could be in a movie with Esther Williams. Those were the years that she was making all those swimming pictures. It didn't happen, but it kept us in the pool."

When the Mealiffe family moved to Fresno in 1952, the boys immediately joined the Fresno YMCA swim team which was headed by the legendary Gene Stephens. Michael set many AAU age group and Junior Olympic records in the backstroke. At Fresno High School, the twins swam for Jack Skadden, who was a strict taskmaster, and the boys prepared for school competitions. For the Warriors, Michael was undefeated and he was a member of the Warrior 200-yard medley relay team that set the national high school record in 1959. In 1961, he broke the world record for the 110-yard butterfly. It was a great thrill for Fresno area fans as he did it in the Airways pool and it was the first such record set by a swimmer from Fresno. "It was even more exciting for me because my parents and my twin brother were all there," says Michael. "I credit Gene Stephens, Jack Skadden, and Bud Fisher for enabling Pat and me to both receive swimming scholarships to college," says Michael.

As teenagers, it wasn't long before the twins began to attract attention from many colleges. Among them was USC and coach Peter Daland, who recruited Michacl to come and swim for the Trojans. This choice turned out to be the right one for Michael as he starred at SC and became a three-time All-American starting in1962. He helped the Trojans win the 1963 NCAA Men's Team title by placing second in the 100- and 200-yard butterfly. "My days at USC were amazing," remembers Michael. "Under Peter Daland's coaching, I started swimming the butterfly seriously in addition to backstroke because as he put it,’I need another butterflyer.’ I was swimming with world-class athletes like Murray Rose, Jon Hendricks, and Jon Konrads -all Olympic Swimmers from Australia. It was a heady time and gave me great inspiration."In 1990, Michael returned to swimming competition and as it turned out, he was not through breaking national and world records yet. In 1990, he captured Masters global marks for the 50-54 Age Group in both the 50-meter and 100-meter butterfly. Seven years later, he set the Masters world record for the 55-59 Age Group in the 50-yard butterfly. Michael had to give up competitive swimming due to injury. He is still in great shape and is back in the pool three times a week to kick and walk laps for an hour. "It's great cardio," says Michael. "I tell my friends I have to have chlorine or I'll go through withdrawal." Michael Mealiffe says his favorite accomplishment is raising two children, daughter Shannin and son, Gavin. He also adores his two grandchildren, Brandt and Evan, from Gavin and wife Leah.