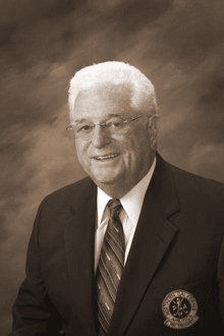 To some, Menchinella is "The Breeze" -- a nickname taken from a country and western song about a fellow who breezed in and out of town. Menchinella owned a van and would chauffeur local pros to their Monday tournaments. Later on, he hired a stretch limousine to take them in style. Others call him "The Godfather" of Fresno or Northern California golf because of his indelible stamp on the sport.

The list of club pros who cut their teeth under Menchinella in the Valley and throughout California is endless. A common quote in thanking him for giving a first opportunity to start some roots as a club pro was that Steve is absolutely the most caring golf professional you could have.

Menchinella's devotion to golf is evidenced by his many honors.

In 2009, Menchinella was recognized by the Northern California Professional Golfers

Association with the Jim Langley award for his lifetime contributions to the PGA. Also honored by the group that year was Menchinella's longtime friend Ken Venturi, the 1964 U.S. Open champion, CBS golf broadcaster and World Golf Hall of Fame member.

In 2004, he received the Golden State Award for his contributions to golf in California. Among the awards other recipients are Bing Crosby and Dinah Shore. In 1999, Menchinella received the Bill Strausbaugh Award from his NCPGA peers. The award recognized his mentoring of club professionals and efforts to improve employment conditions. In 1978, Menchinella was named NCPGA Pro of the Year. In addition, Menchinella was part of the Golf Digest team that selects the top 100 golf courses in the country each year.

Menchinella was one of the founders of a 36-hole pro-scratch tournament designed to spotlight club pros but one that also drew such notables as Craig Stadler, George Archer, Bill Glasson and Jim Colbert. Menchinella himself was a two-time winner of the event and in 1981 Sunnyside hosted the U.S. Junior Amateur Championship.

Menchinella began as a caddy at Sierra View Country Club in Roseville in 1953 and became the assistant pro in 1959. In 1968, he joined Sunnyside as an assistant to head pro Gary Loustalot. Two years later, he was named head pro. He became Sunnyside's director of golf in 1986 and general manager in 1998. He stepped down in 2013, but continued his association with Sunnyside as director of golf emeritus.