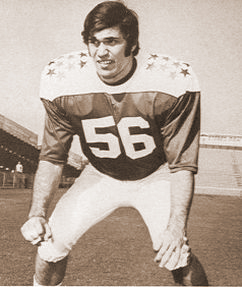 The community of Sanger has always given great support to the Sanger High Apaches athletic programs, especially in football. The Sanger fans have been rewarded for that support, many times over by the school's long list of great teams, coaches, and players. Foremost among the coaches who have achieved recognition after cutting their playing or coaching teeth at Sanger High School are Tom Flores, J.R. Boone, Clare Slaughter, and Ray Newman, while Jim Merlo and Tom Flores head the large corps of players who have gone on to win acclaim at higher levels on other football fields. Jim Merlo was an outstanding multiple sport athlete at Sanger High. In 1969, Jim's senior year, he was named the school's Athlete of the Year after winning the most valuable player awards in both football and basketball. He then played linebacker and center for Clare Slaughter at Fresno City College during the 1969 and 1970 seasons. In 1969, he was an All-American center for the Rams and, in 1970, he was named to the JC All-American team, both on offense as a center, and on the defense as a linebacker.

Later, Jim was inducted into the California Community College Football Hall of Fame.After his time with the Rams, Jim again was offered many scholarship opportunities to play at four-year schools and he chose Stanford University. That decision worked out well for both school and player as Jim led Stanford to the Rose Bowl, while achieving third team All-American honors from the Associated Press. In 1972, Jim was named Stanford's MVP on a very special and certainly memorable Indian team. The team won the PAC 8 (now the PAC 10) Conference with a 6-1 record during the 1971 season which gave them a berth in the 1972 Rose Bowl against undefeated and top-ranked Michigan. In a thriller of a game, Stanford came up with a 13-12 victory that cost the Wolverines a national championship. A fitting climax to the hard-working Merlo's collegiate career occurred when he played in four post-season, all-star games. He was a co-MVP with fellow All-American Greg Pruit of the University of Oklahoma in the 1973 Hula Bowl. Jim also was selected to play for the East-West Shrine game, the Coaches All-American game, and was invited to play in the College All-Star Game, a contest in which the best of the recently graduated college crop takes on the current NFL champions.

That year, the opponents were the Miami Dolphins. The game at Chicago's Soldier Field was close with the college team having a shot at victory, but the Dolphins scored late and won 14-3. It was a little unnerving at first," remembers Jim, going, we said, Hey we can play with these guys.' That was the year the Dolphins had Larry Csonka, Jim Kiick, Mercury Morris, Bob Greise, and a bunch of other legends."Jim Merlo was picked in the fourth round of the 1973 NFL draft by the New Orleans Saints. During his seven years as a linebacker with the Saints (1973-1979), he played in eighty-eight games, made eight interceptions, including three for touchdowns, and recovered eleven fumbles. Merlo held two“interception for touchdown" records as a linebacker during the 1976 season; one an eighty-three yarder against the Atlanta Falcons, the other for forty-five yards against the Green Bay Packers. In 1977, Jim returned another interception for a TD, this time a fifty-seven yarder to beat the Chicago Bears.

Jim is in the real estate business and lives in Fresno with his wife, Rhonda, and their daughter, Brooke, and sons, Jace and Drew. "I am so grateful to have played competitive sports for as long as I did. It taught me that hard work pays off not only in sport, but in life." Jim says.