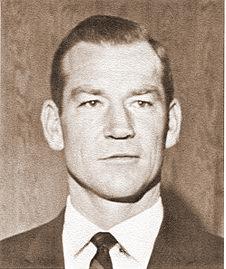 Lloyd Merriman graduated from Clovis High School in 1942 when Daryle Lamonica was only a year old. Two of the most famous Clovis High athletes have stadiums named after them. There is the Lloyd Merriman Field for baseball and the Lamonica Stadium for football. Lamonica's collegiate and professional achievements far outranked Merriman's, but Merriman had one statistic that Lamonica didn't have. He was in the Marine Air Corps for three years during World War II and flew eighty-seven combat missions in a two-year stay during the Korean War. Merriman was born in Clovis on August 2, 1924, years before little leagues. His parents were Carl and Bessie Merriman, who both graduated from Clovis High in 1911. Carl was an outstanding athlete at Clovis and his son followed in his footsteps. Like most boys of that Clovis era, he learned to pass and kick a football as well as ride horses. He was a star in football and baseball and his speed enabled him to shine as an outfielder and a hitter.

Merriman graduated from Clovis in 1942 and enrolled at Stanford University where he was a football walk-on. He hadn't even planned to go out for football that year because he felt it was only a matter of time until he would get his military draft papers. He said he and a group of fraternity friends were playing touch football and they were going to go out for the Stanford team, so at eighteen, he followed suit. In November 1942, he joined the Marines and they let him finish the school year. He put in for and was accepted into the V-5 Naval Flight program. In June 1943, he was called up. He resigned from the Marines and joined the Navy. He graduated from flight training in 1945 at Corpus Christi, Texas and rejoined the Marines. He played football in 1944 during pre-flight training at Norman, Oklahoma. Merriman said it was a "fun team" with young and old players. One was halfback Emil Sitko, later an All-American at Notre Dame. Another was LenEshmont, who after the war played for the 49ers. Merriman was discharged in 1945 and went back to Stanford for the winter quarter. He played baseball for the Indians (now Cardinals) in the spring of 1946 and football that fall.