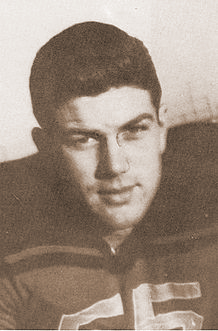 Jim Molich was one of the main targets of quarterback Jackie Fellows on the powerful 1942 Fresno State football team that lost only one of ten games. Molich was born and reared in San Francisco and was part of the great legacy for San Francisco Junior College players that included Ollie Matson and O.J. Simpson. He joined that NFL Hall of Fame duo by being a charter member of that school's Hall of Fame. Molich has one Fresno State school record that still stands. He caught four touchdown passes from Fellows in a 1942 game against Occidental College. Twice, he was named to the Little Al1-Coast team and, in 1942, was on the Little All-American team. Molich was also a forward on the Bulldog basketball team for two seasons and was selected to play in the 1943 College AIl-Star game, but missed out because he was piloting a land craft in the South Pacific. It was during World War II that he contracted malaria which ended his playing career, even though he was drafted by the Detroit Lions.

Molich returned to Fresno State in 1944 and helped coach freshmen teams in football, baseball, and basketball through 1947. Molich resumed his military career in the Korean War.