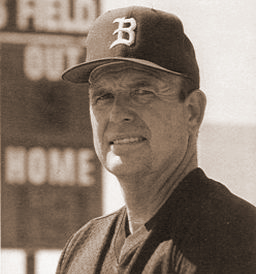 Coach Mike Noakes-whose high school teams won sixteen league championships and five section titles-was known as the fiercest of competitors who relished the battle and gave orders until the very last out. His respect for discipline and fundamentals was legendary in the valley. His competitive nature was balanced off the field with a mellow personality, a great smile, and keen sense of humor. Noakes was born in Taft, but moved to Fresno as a youngster. He was an all-star center fielder at Fresno High School and batted clean-up for the Warriors, who won the Central Section championship in 1957, Noakes' senior year. Valley sports historian Bob Barnett, said: "Johnny Callison, who played his high school ball in Bakersfield, and later starred for the Philadelphia Phillies, was said to be the best high school hitter in the Valley in 1957, but many said Mike Noakes was right up there with him, or better, during his senior year." Noakes played during Fresno High's baseball heydays under Ollie Bidwell with Jim Maloney, Lynn Rube, Pat Corrales, and Dick Ellsworth.

Their American Legion team went all the way to the state championship games in 1956 and 1957. Noakes also played at Fresno City College and the University of California, Berkeley. Counting Bidwell, Len Bourdette, and Pete Beiden as his mentors, Noakes began coaching as a graduate assistant at Fresno State under Beiden, launching a career that would include thirty-four years at the high-school level. Noakes set a record for wins in the Central Section with 708. Most of those victories were at Bullard High School, where his Knights won sixteen North Yosemite League championships and five Central Section titles. Twice, they won the NYL titles six years in a row. Bullard was ranked #1 in the state four times during Noakes tenure and were ranked #1 in the United States in 1993, the year that Noakes was named the National Coach of the Year by USA Today. The American Baseball Coaches Association named him the 1989 Coach of the Year when the Knights were ranked #2 in the nation. The team was ranked #1 again in the 1990 season. From 1990 to 1993, Bullard won thirty-seven consecutive NYL league games, one of the longest streaks in state history. During the 1980s, Bullard had the best record (227-50) in the state and during Noakes' last eight seasons at Bullard, the Knights won at least twenty games a year including an unbelievable 29-1 record in 1988. It's no surprise that Bullard's baseball stadium is named Mike Noakes Field. "I was definitely blessed over the years with great players who came to play, willing to work hard enough to win. We took practice as serious as the games. We tried to keep the atmosphere positive. I'd get on them, but I praised them as well," Noakes said. "It was also a combination of good assistant coaches over the years and the Bullard community was really a big part of it as well. Everyone was so loyal to the school. Still are. There were always the great crowds showing their support for the Knights."

The 1977 Bullard High baseball team with a record of thirty-one wins, one loss, and one tie sent three players to the major leagues: Dave Meier, Rex Hudler, and Steve Ellsworth. And while hundreds of Noakes' players went on to the college and professional ranks, even for many of those who didn't advance, the experience of playing Bullard baseball under Noakes made a difference in the rest of their lives. Nick Papagni, a pitcher, first baseman, and right fielder under Noakes stated, "It was so much fun. Games or practices were the same, no difference. Coach was great. You really knew he stood behind you. He gave us a lot of confidence and pumped us up. We worked harder than anybody and we just knew we were going to win." After a stellar career at Bullard High, Noakes coached for seven seasons at Central High School and also was the first base coach at Fresno City College.