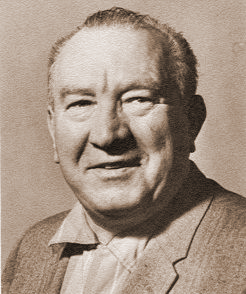 Basketball was a bruising contact sport when Ed Orman played for Brazil High School and captained a team that went to the state high school tournament in Indiana, the hotbed of basketball. There were no dunks and everyone shot with two hands. Orman also lettered in baseball, football, and track. When Orman arrived in Fresno in 1921 after a brief reporting job with the Venice Lifeguard in Southern California, he joined the sports staff of the Fresno Republican.

Orman worked under sports editors Tom Spink, John Lee, and Jack Perry before switching to The Fresno Bee where he was named sports editor in 1927. Under his wing were such former Fresno Staters as O.M. "Diz" Shelton, Howard Lane, and Burton Leiper. Orman worked at night and took college classes during the day which enabled him to get his degree. He was a 1928 Fresno State graduate and a lifetime Bulldog booster, but that never impacted his coverage. If there was a negative story in Bulldog sports, he reported that as well as the positive stories. For the next forty years, Orman was "Mr. Sports in Fresno and his "Sports Thinks" column became a must-read. He had so many sources feeding him information that he scooped some of the bigger papers on important stories.

Orman and John Voenes met for a morning coffee break and agreed to explore the possibility of a Fresno Athletic Hall of Fame. Orman pushed the idea in the paper and both men recruited a group of sports-minded Fresnans to bring their dream to fruition. From a modest beginning in1959 with eighty-nine in attendance, the FCAHoF celebrated its 50th anniversary in 2008 with more than 600 people filling the Fresno Convention Center. It would be difficult for any Hall of Fame to top the six inaugural inductees, but the remarkable thing is the steady stream of superstars inducted that continue to put Fresno on the sports map.

Orman covered the first West Coast Relays and all thirty-nine stagings of that world-recognized event until he retired in 1966. He saw all of the forty-three world records including Walter Marty's national high school high jump record and Marty's outdoor world record. Orman was ringside in San Francisco when Young Corbett III became the world welterweight boxing champion. He was in the Indianapolis garage getting firsthand information shortly after Billy Vukovich was killed while lapping the field in an attempt to win his third straight Indianapolis 500 on May 30, 1955.

Orman covered the highs and lows of Fresno State football. He also was press side for such blue ribbon events as the World Series, the Rose Bowl, the East-West game, and the U.S. Olympic trials. Orman played a big role in convincing the St. LouisCardinals to put a California League Class "C" farm team in Fresno. He also helped start the California League and recruited an old St. Louis fan, John Euless, to build a ballpark in time for the 1941 season opener. Orman was the official scorekeeper and the first president of the California League Baseball Writers Association. One of his closest friends was Associated Press scion Russ Newland. Orman would get midnight calls from some of his friends in Bay Area bistros to settle bets on boxing questions. He was a virtual encyclopedia on early sports and resno personages.

He ran his department as a benevolent dictator and he was the only opinion that counted. But that was the way it was in most papers of his day and his staff recognized that. Orman married Helmond Barstow from one of Fresno County's pioneer families in 1934 and from that union came three girls and four boys. For a few years after his retirement, he wrote a popular Sunday "Down Memory Lane" column for the Bee where he highlighted important happenings and the people involved in Fresno's early days.