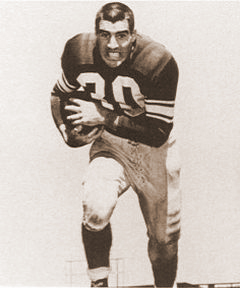 Dean Philpott was the prototype fullback-the kind that John Madden liked to talk about while commentating games. Philpott had a bull-like neck, big shoulders, and a raw-boned build with sharp elbows that hurt any player he ran over. He was highly recruited out of Anaheim High School and almost went to the University of Oregon, but Fresno State had the vocational teaching program that he craved, so he accepted Bob Burgess offer to be a Bulldog. "I never regretted my decision," Philpott said. "I didn't just come to school to play football, I definitely had my mind made up to teach auto and metal shop and that's what I did for thirty years at Sanger High School.

I tried the NFL for one year with the Chicago Cardinals and another season with the Oakland Raiders in the old AFL. Both times, I made the team and, both times, I got hurt. I missed my second season with the Cardinals due to a six-month stay in the Army, first at Fort Ord and then Fort Sill, Oklahoma. That's when I signed with Oakland, made the team, but after five games, I hurt my knee and decided to come home and start my teaching career."

Philpott attracted a lot of attention at Anaheim High under Coach Van Horbeck. The team went to the CIF playoffs twice and Philpott played in the All-Star game in San Diego and the Shrine High school game in the Los Angeles Coliseum. He was the youngest back on Clark Van Galder's 1954 team at Fresno State, but it was difficult to keep him out of the lineup. His nickname was the "Anaheim Assassin." Philpott had good hands and could catch passes. He had a nose for the end zone and was a hard-tackling linebacker on defense. Philpott piled up yards, touchdowns, and extra points for four years and, when his collegiate career ended. He had set school records of 2,533 yards gained, twenty-nine rushing touchdowns, thirty-five total touchdowns, and 230 records. "I never paid much attention to those sorts of things," Philpott said. "I was a team man. I was totally shocked in 1993 when they said my total yards record was broken. I wasn't aware I still had it.

Then Anthony Daigle, the same year, broke my career touchdown record." By the time that Philpott graduated from high school, Bob Padilla and John Steinborn finished eligibility at Orange Coast College. All three came to Fresno State and roomed with Philpott. "Great guys, I couldn't have had better," Philpott said. "At one time, we had six in the house. We did a lot of fishing and hunting together. Our other big back, George Van Zant took us fishing every chance he got. That was another lure to Fresno, the closeness of the mountains and lakes and I was even close enough to home, so if my mom needed me I could get there quickly." Philpott began his teaching career at San Joaquin Memorial and then was hired at Sanger High. He taught metal and auto shop and was an assistant football, baseball, basketball, and track coach for eight years. After failing to get the head football job, he staved in the classroom where he had the satisfaction of seeing several of his students become mechanics or metal workers. Philpott said many of his Bulldog teammates stayed in the Fresno area and either became teachers or peace officers. Into his seventies, Philpott continued to farm his ten acres of oranges and also was his daughter's volunteer coach at CentervilleElementary School.