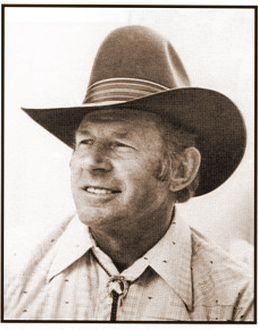 From the time he was six, "All I ever really wanted to do was to be a cowboy" Wilbur Plaugher said when he could see the cattle drives from his family home in Sanger and watch the cowboys move the herds across the open range to the mountains. It didn't take long before Wilbur was in the saddle. In 1930, the eight-year-old Plaugher had his own donkey which he rode all day, every day. Though times were tough during the Depression, his father was a ranch worker and the family struggled, but got by. Wilbur found riches in living the country life. By the time he was fourteen, he had managed to get his first horse and that summer he was hired out to do a "man's work" on a cattle drive up into the high Sierras, working the herd just for board. It was only for a week, but young Wilbur did such a good job, he was hired for the following summer at $1 a day, working again in the mountains that he grew to love so much. "Man, that was just wonderful," recalled 86-year-old Plaugher. "Sleeping up there on the ground, learning the cowboy way, up there in all that beauty that the Good Lord provided, and making a $1 a day, shoot, I had it made." At 6'4" and 210 pounds, this rugged young cowboy, attended Roosevelt High School in Fresno and was a dream come true for the football coach, who figured he had a true “rough rider" who was already handling steers on the range and obviously could manage any fullback coming through the line of scrimmage.

However, it turns out there were some cattle up in the Sierras that needed chasing and the now full-fledged cowboy was in the hills rounding them up and couldn't get back in time for the season. And that was the end of football; it was an easy choice for Wilbur.He was soon in demand at ranches around the Valley, getting offers to work for $50 a month, which he did for a couple of summers while in his teens. It was at that time that he began attending rodeos with the other cowboys. At one Clovis rodeo, Wilbur decided to enter, and on his very first try, he took second place in the Brahma bull event. In his second rodeo, he took third place in the bronco-riding event. At that point, something started to become very clear to Wilbur. He came to see that there was a good living to be made on the rodeo circuit and he decided to give it a try.

During Plaugher's rodeo career, his good friend, Slim Pickens, another Fresno area cowboy and rodeo performer, who Pickens, another Fresno area cowboy and rodeo performer, who later became a movie star in Hollywood, was moonlighting as a rodeo clown. Wilbur was fascinated not only by the art of saving the cowboys from devastating injuries, but also in entertaining rodeo fans. This job quickly became another niche for him. In those early days, the fans howled when he would compete in the rodeo events while wearing clown gear. Wilbur eventually became the most famous clown in all of rodeo. As the years went on, his intricate clown routines were a favorite everywhere he went and included trained dogs, ducks, and even monkeys riding dogs in barrel-racing patterns. The show was a fan favorite all over the world and Wilbur Plaugher is in many a Cowboy Hall of Fame. Over the years, Wilbur appeared in movies and on countless television shows and is a very much in-demand speaker and motivator. In perhaps his most cherished accomplishment of his career, Wilbur co-founded the Fellowship of Christian Cowboys in 1971, which today has more than 100 chapters in the United States. "Everywhere you look on this earth you see signs of God," says Wilbur. "It's so wonderful what He put here for us to enjoy for our visit." In A Cowboy's Life, a documentary on his colorful career and philosophy, Wilbur is seen doing what he loves best, being grateful to God for the beauty of the natural world as an eighty-six year old everyday cowboy on his ranches in Central California. He stayed strong, healthy, happy, and grateful to be in the saddle every day, especially enjoying the cattle drives. All he ever really wanted to do was to be a cowboy.