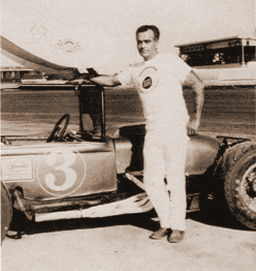 Al Pombo is another Fresno-born auto racer who has reached legendary proportions by accruing more than 500 main event victories over his racing career. Born in 1921 and raised in Fresno, Al began his hot rod career as a hobby in high school and started his auto racing career at twenty-three in 1948. AI won seven NASCAR state super-modified championships and numerous headliner titles at tracks throughout California like San Jose Speedway, Capital Speedway in West Sacramento, Kearney Bowl, Clovis Speedway, and others. He was a Kearney Bowl champion nine times, won six championships at the Clovis Speedway, and five more at San Jose Speedway.

Born in 1921 and raised in Fresno, Al began his hot rod career as a hobby in high school and started his auto racing career at twenty-three in 1948. Sponsors like Bill Haase and Fred Ede, Jr. kept Al busy as he built a reputation as one of the most colorful and well-respected drivers in California racing history. Back in the 1950s when stock car racing was becoming so popular, Al was content to drive out on the stock car circuit in towns of all sizes. "We used to race eight races in seven days back then. It just seemed like we had more time to do it," Al said recently. The sport was certainly catching on and the drivers would travel the circuits throughout the summer and fall. Al won his first California Gold Cup Race of Champions in 1961 as he roared to victory in his Corvette-powered 1932 Ford sedan in front of 5,000 fans at the Capital Speedway in West Sacramento. He had started the race in 41s position and managed to take the lead in the 28th lap of the 100-mile, 200-lap race, holding on all the way to the finish. Many of his laps were run in better than thirty seconds on the half mile track. His winnings that day were 1,000 silver dollars. In 1961, Al won another California State NASCAR championship as well. During the 1960s, fans loved to watch Al work his way from the back of the pack and take the lead. The fans loved it and his fellow drivers respected it. In October 1964, Al won big races on consecutive nights in Stockton and San Jose and the next night won his second California Gold Cup Race of Champions in Sacramento in his now famous number Circle 3. This time his starting position was 55th and by the 32nd lap, he had passed them all, holding and maintaining the lead for the rest of the 200-lap event. Pombo beat the second place finisher, Ed Brown, by eight laps on the half-mile track. Al won two more of the California Gold Cup championships in 1966 and 1970.

Al ended his twenty-five years in racing in 1972. Dennis Gage, a director of the Gold Cup series, said "Those of us who watched and cheered Al Pombo on those dusty tracks around California knew that we were lucky enough to be watching the master of the West Coast half mile." In his retirement, Al still liked to go to the races and visit with the fans and to talk about the glory days of California dirt and hardtop track racing. His manager and friend of many years, Paul Reiter recalls, "In 1976, four years after Al retired, he was asked to come out of retirement for one more race. It was a sprint car race at Clovis Speedway and he accepted the challenge. The car was owned by Al Brazile and Al Pombo raced for his friend and the fans, one more time," says Reiter, "And he won! He beat the twenty-eight other cars and that was his last race. That was how competitive he was."Al Pombo's name is still a favorite among racing fans and he is honored to be in many racing halls of fame around California. Madera Speedway runs its annual Al Pombo Classic each year and Al tries to make it to as many of them as he can.