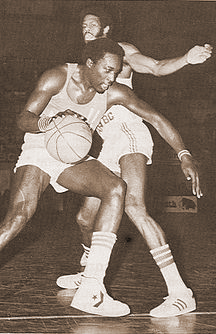 What did having the skills to play basketball from Fresno's playgrounds to collegiate, professional, and European courts, ultimately mean to Clifton "Cliff" Pondexter? "It was a tour of life," he said. "I was extremely fortunate to play in so many countries and meet so many interesting people."Pondexter's hoop history includes competing for San Joaquin Memorial High School, Long Beach State, NBA's Chicago Bulls, and in the Euroleague.

Pondexter's celebrity began at San Joaquin Memorial where Clifton and older brother, Roscoe, attended from 1969 to 1971 and were the most fearsome twosome in the central San Joaquin Valley. Roscoc, 6'7" and 270 pounds, and Clifton, 6'8" and 235 pounds, were awesome players for SJM coach Tom Cleary. Roscoe secored 2,288 points during a four-season span. Cliff scored 2,215 points during his four years. Roscoe and Ciff combined their skills and power to lead the Panthers to the 1971-1972 Northern California title, and after Roscoe graduated, Cliff guided SJM to a second consecutive NorCal Championship. Clif would also play with a third Pondexter sibling, Sam. Cliff was a prep All-American and acknowledged as one of the nation's top four players during 1973 by Sports Illustrated. Roscoe later played for coaches Lute Olson and Jerry Tarkanian at Long Beach State and was the 17th pick in the third round of the 1974 NBA draft by the Boston Celtics. Roscoe chose instead to play ball for ten years in Europe. Meanwhile, Cliff was a 16th selection in the first round of the 1975 NBA draft by the Chicago Bulls. He spent one year at Long Beach State, three seasons with the Bulls, and the next eight seasons in the Euroleague. During his career with the Bulls, Cliff collected four points and 381l rebounds his first year, 256 points and 238 rebounds his second season, and 88 points and 130 rebounds in his third season in 1977-1978, giving him 778 points and 747 rebounds career statistics.

Cliff logged his first three Euroleague seasons in Paris with ASPO Tours de France. He also played in Greece, Spain, Portugal, Italy, Sweden, and Israel. The high point of his career from prep to pro, Cliff noted, was winning the first NorCal Tournament of Champions in Oakland. "It happened twice, but that first time was the best. I will never forget it." Following his return to the U.S. from Europe, Clif operated his own construction site cleanup business for several years and currently is doing security work and coaching at a West Fresno middle school. The Pondexter family basketball legacy is not over yet. Cliff's nephew, 67" and 205-pound Quincy Pondexter (Roscoe's son) was a standout for the University of Washington.