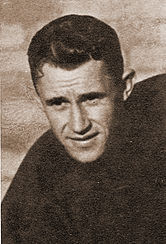 Gib Rambo had the heart of a lion while competing in basketball, football, and track at Wasco High School and Fresno State. The kind man, who served as executive director of the SPCA for nearly half a century, had the patience of Job and was as gentle as a lamb with animals. His motto when dealing with animals was "kindness builds character, cruelty destroys it." horses, and plowed the fields. Rambo was born in Semitropic, a small town west of Wasco, and learned a strong work ethic while toiling on his father's 1,000-acre ranch. After attending classes at Semitropic's one-room schoolhouse, Rambo returned home. The walls of Rambo’s home are lined with pictures denoting his athletic trophies and SPCA honors. Gib was teammates with Dutch Warmerdam and Kermit Koontz at Fresno State.

In a story written by Lou Lampe on the occasion of the 50h anniversary of the SPCA, Rambo said that when the family moved to Wasco, it was like "a seventh heaven." The school was across the street from their home, so he didn't have to walk two miles like he had in Semitropic. He finished the seventh and eighth grade there and then moved to Wasco High School where his exceptional athletic ability began to surface. Rambo's defining asset in athletics was speed. He was quick on the basketball hardwoods and fast enough to win the Far Western Conference 440-yard championship for Fresno State in a good time of 48.7 seconds. Rambo was a slender 6'2", but he could dribble, pass, and shoot with the best guards on any team that the Bulldogs played. He scored in double figures in nearly all his games during an era where that was a rarity.

For three of his four years at Fresno State, he played halfback on the football team. He helped both the basketball and football team under coach Stan Borleske to win conference titles. Rambo graduated from Fresno State in 1937 and married Ruthelaine Farley. He found a job with Pittsburgh Plate Glass and worked there until 1942 when he joined the U.S. Coast Guard. After boot camp in Alameda, he was put in charge of the K-9 corps for the 11th Naval District. Rambo's district extended from San Diego to north of Morro Bay. He directed fifty-six sailors and 234 dogs whose duty was to patrol the beaches looking for submarines or enemy ships trying to drop off saboteurs along the Pacific Coast. Rambo was discharged from the Coast Guard in 1946 and he returned to Fresno. Rambo-trained dogs won blue ribbons all over the western states.

The SPCA was founded in 1946 and struggled financially until Rambo was named executive director in 1961. He initiated fundraising events and solicited big givers which enabled the growth of the organization and the building of new facilities. It was through his efforts that the local SPCA is recognized as one of the finest in the nation. Rambo was able to bring in celebrities like former world boxing champion Max Baer and notables from both the athletic and entertainment world to headline his fundraising banquets. It was a labor of love from one of Fresno's finest.