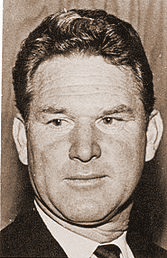 How could a man who was kicked off his Parlier High School team twice, involved in a car accident that gnarled his left hand, and suffered a skull fracture when hit by a baseball in spring training end-up as a successful twelve-year pitching coach of the Los Angeles Dodgers? It is an amazing story. Red Adams has fond memories of working for the Dodgers and the O'Malley family, father Walter and son Peter, for twenty years, first as a scout, then as a spring training assistant, and finally as a pitching coach. Adams grew up during the Great Depression and had a very undistinguished high school career; a part of one season. "My brother Morris was a super athlete, he should have made the big leagues so I followed him to Parlier High," Adams recalled. "Well, I was not as focused or as serious as my brother, so the coach cut me before my freshmen season began."

The next year, Adams was involved in a roller skating accident and broke his left arm. Veteran Coast League player Charley Moncriet lived in Parlier, saw Adams throwing, and encouraged him as a pitcher. Adams got his grades up and won three or four games for Parlier in his junior year, but again the coach cut him, so Moncrief got him into the famous Fresno Twilight League and he won three games for the Holmes Rookies. Before Adams started his senior year, Moncrief took him to a tryout camp at Wrigley Field in Los Angeles. "I was a seventeen year old kid and due to the Depression, there were 250 kids there from all parts of the country trying out. Well, the Cubs signed me |up]. I went home and like a fool quit school and went to a Cubs Class 'D' league in Bisbee, Arizona. I was 16-8 in a short season and the next year, they sent me back to Bisbee. I thought I would at least get to Class 'C' and then they told me Bisbee had been elevated to Class 'C,' so it was a promotion."

Adams had a car accident that severed the elan muscle in his left elbow, causing a lack of function in his left hand. Adams was in the Pacific Coast League from 1942 to 1957, winning more than 150 games. In 1941, he won twenty-one games following an almost-miraculous recovery from a sore arm through trainer Danny Carroll. That year elevated him to the Cubs major league team and they were counting on him. He had just finished pitching batting practice and was sitting on a bench in front of the dugout when a ball hit him over the left eye and fractured his skull. When he recovered, the season was well along and he made a few appearances without success. He went back to the Angels and said he "was a sore arm pitcher for the rest of his career even though he had a l5-16 record and league-leading 2.17 ERA in

Dodgers pitching great, Don Sutton said during his induction into the Baseball Hall of Fame at Cooperstown: "Red Adams is a standard by which every pitching coach should be measured. No person ever meant more to me in my career than Red Adams and, without him, I wouldn't be standing in Cooperstown today." Left-handed ace Tommy John was quoted: "Red saw me throw on the side and told me, “You know, you can win with just a fastball." I thought he was kidding. I had to pitch a certain way, or so I thought, but Red kept pounding it into me that I could get by on a fastball. That advice in 1972 enabled me to have the best years of my career."

Adams was reluctant to talk about himself stating, "Any success I had was due to the fact I took time to know my pitchers,"Adams said. "No two pitchers were alike. What would work for one might not work for another. I liked to interact with them. I never thought of myself as a coach who knew all the answers. I did a lot of observing and not a lot of talking. Pitchers get into slumps just like batters and by watching them day after day I was able to see when they got away from their mechanics. I got the job after [Sandy] Koufax was retired and [Don] Drysdale was in his last year, but I did get to know them and benefitted from their experience."

Adams served under Managers Walt Alston for eight years and Tommy Lasorda for four as well as general manager Al Campanis. "The whole Dodgers organization, top to bottom was first class," Adams said. "Mr. O'Malley treated everyone like a family. He was loud, funny, and liked to have fun. His son, Peter is different, but a great guy.

“The training camp at Vero Beach, Florida was like a resort." Adams' pitchers topped the National League in earned 170 Dwight "Red" Adams run averages several times. Among his best were Claude Osteen, Jim Brewer, Don Sutcliffe, John Sutton, and Al Downing. Adams's only regret was when the Dodgers made the World Series three times in his twelve years and lost all three, once to Oakland and twice to the New York Yankees. "Guess they should've had a better pitching coach," Adams quipped.