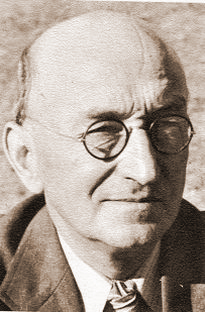 Although his own playing career ended nearly six decades ago, Emory Ratcliffe has probably made the greatest contribution of any one man to athletics at Fresno State College.

As the organizer and coach of many of Fresno State’s early athletic teams, as coach (for a brief period) of FSC’s football team in 1921, as chairman of the Fresno State board of athletic control until his retirement in 1948, as leader of the drive to construct the stadium which today bears his name, and as one of the founders of the West Coast Relays, Ratcliffe has left a deep and lasting imprint on athletics at Fresno State and in Fresno.

Emory Ratcliffe was born in 1878 in New Castle, Indiana, an attended Earlham College in Indiana, where he graduates in 1903. Despite his small size, he starred in football, baseball, and track and set a collegiate record by drop kicking 10 field goals in one game. After teaching assignments at Vermillion (Ill.) Academy, Plainfield (Ind.) Academy, Beloit (Wis.) College, Santa Ana High School, and Whittier College, Ratcliffe came to Fresno State in 1913 to organize the social science department, which he headed for 35 years. Since his retirement, he has maintained his interest in FSC athletics, being a constant visitor at football practice despite his 82 years.