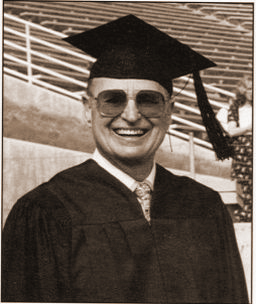 There are few major building projects on the Fresno State University campus, athletic or academic, that don't contain the fingerprints of Bud Richter. One prime example is Bulldog Stadium, where Richter and his wife, Jan, provided an anonymous gift of $500,000 in seed money to help school president Dr. Norman Baxter to convince Chancellor Glenn S. Dumke and the CSU State Board of Trustees that Fresno was capable of raising the $7 million needed to build the stadium. Richter, along with Bob Duncan, also suggested the ten-year reserved seat plan, after which renewals were used for the stadium expansion in 1991. The stadium and a Division I status were just far-off dreams when Richter was introduced to the Bulldog Foundation in 1957 by his father, Elmer. That was the beginning of a long love affair with Fresno State athletics in particular and the university in general. Bud served two terms as president of the Bulldog Foundation from 1964 to 1966.

The Pepsi-Cola Company, founded by Bud's grandfather in 1895, was a family business. Many Fresno State athletes worked for Pepsi when scholarships were tied to work aid jobs. Some stayed on as regular employees. Richter began spending his summer vacations doing odd jobs at Pepsi at the tender age of eight. He was born in Fresno in 1926 and, except for time spent at Stanford University and two years in the U.S. Navy, lived here all his life. Richter attended Jackson Elementary School, Longfellow Junior High, and Roosevelt High School, where he was school president in 1944, his senior year. He joined the Navy in 1945 and left the San Diego Naval Training Station in August of that year headed for Guam. En route, Japan surrendered and Richter was assigned to Iwo Jima to help decommission the naval base there. He was discharged in 1946 Richter had his first date with his wife-to-be Jan during the summer of 1943 in the rumble seat of a friend 's Model A Ford. They began going steady that year and were married April 25, 1947 in Reno.

They lived two years in Palo Alto and Jan worked to help Bud graduate from Stanford in 1949 with a degree in economics and accounting. The education served him well when he began full time service at Pepsi working in the office, supervised by his uncle, Roy Richter. Within two years, he was plant general manager. While Richter was personally involved with the Pepsi Cola distributorship, Fresno State benefited from his generosity, but so did youth groups of every age from elementary through community college. Pepsi sponsored teams, installed scoreboards, and provided scorecards. He was one of the founders of the City-County All Star Football Classic. In 2003, Bud was named to the Fresno State Athletic Corporation Board of Directors which oversees the school's interscholastic sports program and not long after, he and Jan, who have worked behind the scenes in many areas of giving, accepted the request by school president John Welty to co-chair the first capital campaign for the university leading up to its 100h anniversary in 2010.